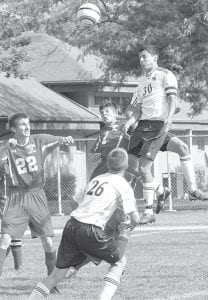 Just over a minute into the game, Archbold struck when Brodie Nofziger volleyed in a goal from 7 yards away after David Bontrager crossed the ball from the left.

Eight minutes later, defender Jacob Ott dribbled up the right side before serving toward the goal. Bontrager tapped the ball backward to a waiting Shae Hernandez, who scored from 4 yards on the left for a 2-0 lead that lasted the remainder of the half.

Two minutes after the break, Archbold goalie Emerson Radabaugh deflected a long Pirate shot before Dallas Geckle knocked in the rebound to close the gap to 2-1.

With 20 minutes remaining, Archbold took a corner kick. Nofziger jumped to attempt the header, but was fouled by the Pirate keeper. He converted the ensuing penalty kick for a 3-1 lead.

The hosts kept up the pressure two minutes later when Zach Schwarzman scored from 10 yards.

With nine minutes remaining, Bontrager was tripped at the left edge of the penalty area. He banked the resulting penalty kick off the left post and in for the 4- 2 final.

The junior varsity game was a 1-1 tie with Oscar Calderon scoring for Archbold.

The Blackbirds visited Spengler Field, Saturday, Oct. 6, on a chilly night before a large and energetic crowd.

Both teams came out firing, earning numerous scoring chances but coming up short in a scoreless first half.

Two minutes after halftime, Archbold got on the board when Bontrager fired a shot that Blackbird goalie Alex Roth blocked before a charging Hernandez knocked in the deflection from 2 yards.

With 10 minutes left, Nofziger added a goal from 2 yards away with Ben Eggers assisting from 30 yards on the left.

Two minutes later, Archbold was whistled for handling the ball in the penalty area. Pettisville senior Caleb Liechty calmly netted the penalty kick to shrink the Archbold lead to 2-1.

With three minutes left, Micah Bernath crossed the ball from 20 yards deep on the right side before an airborne Nofziger volleyed in the third Blue Streak goal from 5 yards.