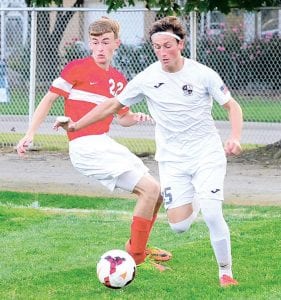 Spengler Field was the site for a pair of Archbold boys soccer contests last week.

The Streaks defeated Wauseon 9-1 in a Northwest Ohio Athletic League game and bested Liberty-Benton 3- 1 in a non-league contest.

AHS is tied atop the league with Liberty Center.

It was the first match at Spengler Field for the AHS boys this season, and they did not disappoint the hometown faithful.

“We’re happy to be back at Spengler,” said Sean Stewart, AHS head coach.

“The field is not exactly where we want it, but it’s certainly playable.”

The match was a onesided affair as the Streaks dominated from the start.

Andrew Hogrefe started the scoring with 35:23 on the clock in the first half.

Kaiden Bedsole took even less time to score goal number three, scoring 26 seconds later with 34:12 to play in the half for a 3-0 lead.

Bedsole and Kidder added two more goals to end the first half with a 6-0 advantage.

Bedsole recorded a hat trick just 3:27 into the second.

The Indians finally got on the scoreboard on a Brandon Martinez goal with 35:30 left.

Kidder recorded his own hat trick with 26:40 left, scoring his third goal for an 8-1 lead.

Daniel Nieves scored the final goal with 17:20 remaining for the final 9-1.

“It’s important for us to be ready for these league games,” said Stewart.

“Wauseon is a young team, so they’re still learning. That said, I think we did a good job of taking (the game) with a good amount of seriousness and going out and executing on what we need to do.”

Bedsole and Lucas Yoder each had two assists. Kidder, Elijah Zimmerman and Trey Theobald each had one.

Kidder gave the Blue and Gold the early lead, scoring with 18:07 left in the first half. He made it 2-0 with another goal less than four minutes later.

In the second half, L-B scored with 22:14 left on an Austin Patrick goal.

Bedsole slammed the door on any comeback attempt with 12:42 to play, scoring on a Kidder assist for a 3-1 victory.