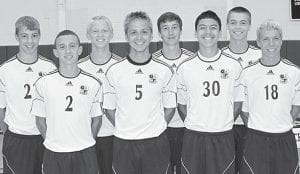 Boys soccer, under the guidance of Sean Stewart, head coach, has begun its third year as a sanctioned sport at Archbold High School.

The Archbold Soccer Club covers all expenses, but sanctioning allows the team to play in postseason tournaments.

The Streaks lost nine letterwinners from a team that went 13-3-0 in its second season last year and won a Division III sectional championship.

“We lost a large and talented senior class from 2011,” said Stewart.

“This year’s team has plenty of talent, but may take some time to mesh on the field.

“We will be looking to some young players to step up and provide depth.”

Juniors returning are Jacob Ott and Brodie Nofziger. Gavin Morton, a sophomore letterwinner, also is back.

Stewart said a number of players are coming off a very successful junior varsity season and are looking to make a contribution at the varsity level.

“There are a number of players with the ability to score or create opportunities for others,” said Stewart. “We can move the ball around well, and we have some decent speed as a team.

“The defense has some good experience and athleticism.

“If we stay healthy, this team has the potential to make a playoff run.

“There are a lot of new players stepping into start- ing roles, and it could take a while to find our stride.

“If our midfield can link up with our forwards consistently, we can score a lot of goals this season.”

Assisting with coaching duties are Ali Gracia and Stewart Rodger.

The Streaks are scheduled to open the season, Saturday, Aug. 18, at Riverdale.