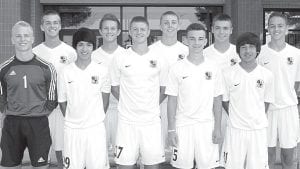 Boys soccer, under the guidance of Sean Stewart, head coach, begins its fifth year as a sanctioned sport at Archbold High School, Tuesday, Aug. 19, when the Streaks host Van Buren.

The Archbold Soccer Club covers all expenses, but sanctioning allows the team to play in postseason tournaments.

Beginning in 2016, AHS boys soccer will become a school sport.

The Streaks lost seven letterwinners from a team that went 12-4-3 in its fourth season last year, was cochampion of the Northwest Ohio Athletic League, and advanced to the Division III district finals.

“On top of that, the incoming freshmen class is undoubtedly one of the best in program history.

“We are looking at a squad with a lot of depth, especially on defense.

“There are a number of other sophomore/freshmen players with a decent chance to see varsity action as well, and they can be expected to push for it early in the season.”

“The depth of quality talent in this squad is greater than any previous season,” said Stewart.

“Because of this, we shouldn’t need to be too concerned about injuries or relying on one or two key players.

“We are a team that will possess well, make incisive passes, and play with a high soccer IQ.

“Defensively, we have a lot of experience, and we have a goalkeeper that is capable of making big saves.

“Despite losing the bulk of our goal scorers the past two seasons, we have a number of players capable of putting the ball in the net from different positions.

“Look for Jeremy Lerma to have a strong season in central midfield. He is able to control games with his passing, and is starting to add a scoring dimension to his game.”

As far as team weaknesses, “Our overall team speed may be down a bit, so we will have to learn to compensate for that with a slightly different style of play,” said the AHS mentor.

“We also will need to gel as a team very quickly with a significant amount of turnover from last season.

“Fortunately, we have had a productive summer and preseason, so this shouldn’t be too big of an issue.

“We have a young squad overall, but we definitely will not be looking at this season as a rebuilding year,” said the coach.

“There is more than enough quality (and just enough experience) in the squad to push for not only an outright NWOAL title, but a decent playoff run as well.

“In the league, I expect a strong challenge from Bryan.

All NWOAL teams played us tough last year, and I am sure it will be the same this season.”