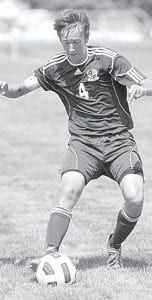 David Bontrager dribbles the ball down the field.– photo by Mary Huber

The Streaks (4-0) have outscored their opponents 22-1 in the first four games.

Archbold had several scoring chances early but couldn’t convert until the 17th minute, when junior midfielder Brodie Nofziger fired a shot that was blocked by the Bryan goalie before Nofziger successfully followed his own rebound for the score.

Fourteen minutes later, junior midfielder Santos Quintanilla launched a corner kick to Nofziger, who headed in the tally from the 6-yard mark.

The Streaks kept up the pressure toward the close of the half.

Nofziger penetrated the right side of the Bryan defense before dishing off to senior midfielder Shae Hernandez, who found the net from 4 yards away six minutes before halftime.

Archbold continued controlling the tempo after the break.

Seventeen minutes into the half, senior forward David Bontrager sent a through ball from midfield to Nofziger, who finished the breakaway goal after hurdling the diving Bryan keeper.

Nofziger’s hat trick gave him 13 goals on the young season.

Bontrager hit the scoring column with 13 minutes remaining during a scramble near the goal.

The initial shot was stopped but eluded the keeper’s grasp long enough for him to knock it in from 6 yards away on the left side.