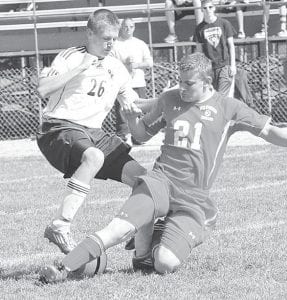 A Wauseon Indian slides in front of Blue Streak Micah Bernath (26) and blocks him from passing the ball.– photo by Mario Gomez

The Streaks were paced by hat tricks by senior Ben Eggers at Liberty-Benton and junior Brodie Nofziger against Wauseon.

The Streaks traveled to Findlay, Thursday, Sept. 27, in a battle of the two topranked teams in the Div. III Northwest District Coaches poll.

Eggers got the scoring started in the sixth minute, punching in a goal from 2 yards on the right side after Shae Hernandez served the ball from the left.

The Eagles responded nine minutes later when Griffin Rath broke away from the Archbold defense for the score.

Liberty-Benton used its speed to establish several scoring threats as the two teams traded chances. In the 24th minute, Nofziger passed to David Bontrager, who knocked a shot off the right post and into the net from 6 yards away to give the Streaks a 2-1 lead heading into halftime.

Six minutes after the break, Eggers scored from 7 yards, again assisted by Hernandez with a looping cross from the left.

Two minutes later, Nofziger was tripped in the penalty area and successfully converted the penalty kick for a 4-1 Archbold lead.

Eggers finished his hat trick with 18 minutes remaining when Bontrager fired a shot off the crossbar and Eggers knocked in the rebound from 8 yards.

Archbold had 15 shots on goal to the Eagles’ four. Goalkeeper Emerson Radabaugh nabbed three saves while Dillon Burkett had 10 for LB.

Wauseon used its speed to make several runs at the goal early before Alex Hurst grabbed the lead for Archbold, scoring from 4 yards away on the right in the 11th minute with Bontrager assisting.

Eight minutes after halftime, Nofziger was tripped just inside the penalty area on the right side. He knocked the ensuing penalty kick into the left side of the goal for a 2-0 Archbold lead.

Six minutes later, Nofziger scored from 3 yards, finishing the rebound of a Bontrager shot off the bar.

Nine minutes later, Nofziger finished a breakaway goal, firing his shot from 12 yards out and completing his hat trick.

Bontrager scored the fi- nal goal with 16 minutes remaining, finishing from 14 yards away after a Matt Sevey cross from the right.

The Streaks outshot the Indians 14-5.

The Archbold defense notched its fifth shutout of the season, paced by defenders Gavin Morton, Seth Yoder, Jacob Ott, and Ryan King, who have allowed only nine goals to date.