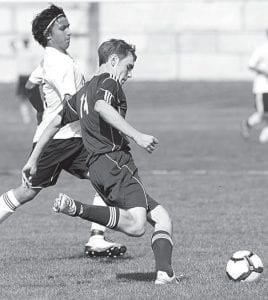 Archbold’s Travis Roehrig, races Pettisville’s Gonzalo Hernandez (in white) for control of the ball, Saturday, Oct. 9. The Blue Streaks and Blackbirds battled to a 3-3 tie.–photo by Mary Huber

The visiting Panthers chalked up two goals by Nate Seeman in the first half and two by Eddie Perrit in the second half to improve to 4- 8-2 on the season.

“The boys played hard, but we made a few critical mistakes that really hurt us. If we can eliminate those, we can play with just about anybody,” said Sean Stewart, Archbold head coach.

The Streaks traveled to Pettisville for a Saturday, Oct. 9 rematch with the 6-5- 2 Blackbirds.

Pettisville jumped out to a 3-0 lead on first-half goals by Taylor Short, Gabe Valdez, and David Reyes.

Archbold got on the board five minutes before halftime when junior forward Jarett Lerma took a pass from Adrian Ramirez and knocked it into the upper 90 section of the goal.

Three minutes after the break Lerma struck again, this time from 8 yards out with a powerful shot off an Aaron Bontrager corner kick.

Archbold’s Adrian Ramirez (11) and Pettisville’s Philip Roth (10) use their heads in their boys soccer match.– photo by Mary Huber

Lerma finished his hat trick with another tally assisted by Bontrager, this one with seven minutes remaining to salvage the tie.

“It was always going to be tough after we let in some early goals, but we kept our heads up and stayed patient,” said Stewart.

“The defense tightened up in the second half, and we fought really hard to get the goals we needed. Overall, I’m happy with the way we came back, and this should be a game that propels us forward into the tournament.”

Archbold’s junior varsity dropped to 8-4 with a 4-3 loss at Pettisville.