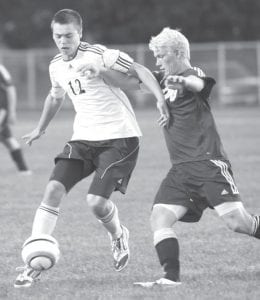 Archbold’s Gavin Morton (12) and a Maumee player battle for control of the ball, Saturday, Sept. 15.– photo by Mary Huber

Alex Hurst struck first for Archbold in the sixth minute, tapping in a goal from 5 yards away after Brodie Nofziger passed from the far right side.

Less than a minute later, following a Miller City infraction, Shae Hernandez took a free kick from 30 yards on the left side that a waiting David Bontrager headed in from 3 yards for a 2-0 lead.

The Wildcats responded in the 19th minute when Jared Snyder scored.

Archbold kept the pressure up in the 29th minute when Nofziger served a ball from 40 yards over the defensive line to Bontrager, who knocked in the tally from 6 yards.

Archbold went ahead 4- 1 two minutes later when Nofziger fired a shot off the Wildcat keeper that Matt Sevey redirected from 8 yards on the right for the score.

Miller City narrowed the deficit three minutes before halftime when Travis Niese scored with Ross Kaufman assisting for a 4-2 score at the break.

The Wildcats picked up the tempo in the second half, earning numerous scoring chances as the Archbold defense tried to fend off the threats.

Ten minutes after the break, Snyder scored again for Miller City, this time on a free kick from 20 yards.

Archbold held on for the 4-3 victory although the Wildcats out-shot the Streaks 10-8.

Archbold entered the contest ranked number one in the Division III Northwest District Coaches poll while Bluffton was ranked fourth.

Nofziger gave the Streaks the lead in the 17th minute, heading in a goal from 2 yards after Hernandez crossed the ball from the left.

Five minutes later, Hernandez served up an assist to Bontrager, who scored from 10 yards on the right. Archbold took the 2-0 lead into halftime.

Thirteen minutes after the break, Bluffton took advantage of an Archbold infraction in the penalty area, with Stephen Tartakov scoring the penalty kick.

With 10 minutes remaining, Bontrager gave the hosts an insurance goal from 6 yards out after Hernandez tapped the ball forward for his third assist of the night.

The Streaks won the shot battle 10-3.

Elijah Robison and Radabaugh each made one save for Archbold while Pirate net minder Kory Enniking notched seven.

Archbold prevailed in the JV match 4-2, improving to 4-3-1 for the year. Jeremy Lerma, Jackson Waidelich, Short, and Zach Meyer all scored.