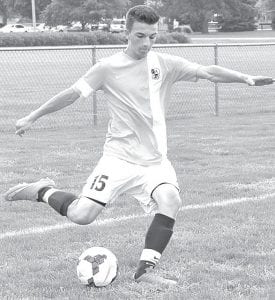 The Archbold boys soccer team dropped a 2-1 decision to Bryan in a Northwest Ohio Athletic League battle at Spengler Field, Tuesday, Aug. 26, before traveling to Liberty-Benton, Thursday, Aug. 28, and gaining a 2-1 win.

The Golden Bears struck first, in the 10th minute, when Ellis Collins found space and made the Streaks pay with a goal from 12 yards away.

Six minutes after halftime, Collins connected again, this time from 20 yards out to give Bryan a 2-0 lead.

Archbold started to build momentum midway through the second half, culminating in freshman Kaiden Bedsole’s penetration of the Bryan defense 10 yards from the goal before being fouled.

Junior Jeremy Lerma made good on the resulting penalty kick, putting the ball sharply into the goal’s upper left quadrant with 31 minutes remaining.

Bryan’s 2-1 lead stood for the remainder of the contest.

Bryan outshot the Streaks 3-2 and held a 3-1 edge on corner kicks.

Archbold goalie Elijah Robison and Bears netminder Connor Terrell each nabbed one save.

Sophomore Jack Fisher notched the first goal of his career in the 17th minute from 7 yards out.

Fisher knocked in the rebound of a Bedsole shot that the Eagle goalie had deflected.

Liberty-Benton tied things up just three minutes after the halftime break on an Austin Patrick goal.

As the half progressed, Archbold had numerous chances but couldn’t connect.

With 17 minutes remaining, Lerma was fouled at the edge of the penalty area. Lerma took the ensuing direct free kick and bombed it into the net past a five-man wall of defenders for the go-ahead goal.

The Streak defense turned back every remaining L-B threat to preserve the 2-1 victory.