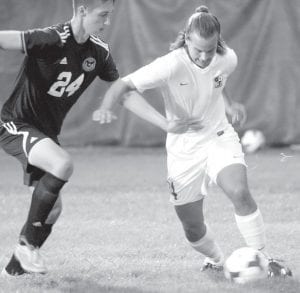 The Bryan defense frustrated Archbold attackers through much of the first half with a diligent line that resulted in 10 offside infractions for AHS.

With 13 minutes before the break, freshman midfielder Andrew Hogrefe connected with sophomore Lucas Yoder, who tapped in a goal from 6 yards out.

The Streaks added a second score 8 minutes into the second stanza when junior middie Austin Welch took a pass from Yoder and dribbled across the middle before firing from 15 yards.

Archbold continued to dominate the tempo, wearing down the Golden Bears as time dwindled.

The Streaks out-shot Bryan 9-3 and held a 6-5 edge on corner kicks.

Kidder started the scoring for AHS in the 12th minute with a pass from Bedsole, dribbling in from the right before knocking in the goal from 6 yards that was partially deflected by the L-B keeper.

Eight minutes before halftime, an Eagle defender was whistled for handling the ball in the penalty area. Senior Jeremy Lerma calmly netted the resulting penalty kick.

Four minutes later, Hogrefe added his first career goal in dramatic fashion, taking a blocked shot by A.J. Short and heading it over the L-B goalie from 7 yards out for a 3-0 halftime lead.

Archbold continued to pull away eight minutes after the break when Yoder passed forward to Bedsole, who kneed the ball over the keeper into the net.

With 24 minutes left, Kidder eluded three consecutive defenders on the right side before passing to Bedsole for the goal finish at 6 yards.

The final score came in the 66th minute when junior defender Jereme Rupp juked to create space to fire left-footed on the near post from 7 yards for his first career goal.

The shutout was the third straight for the defensive corps of Robison, Mike Weigand, Denver Beck, Kegan Ott, Rupp, and Welch.