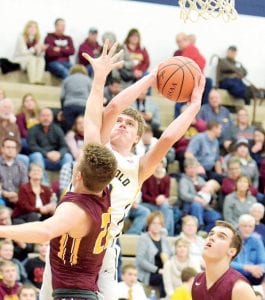 Archbold opened the boys basketball season with a pair of wins last week to start the season 2-0.

“I really didn’t know what to expect after the great football run that we had,” said Joe Frank, AHS head coach.

“We’re still trying to get the football worked out of them, but I think overall those guys did a good solid job.”

Three-pointers were the difference in the game with the Bulldogs, Thursday, Dec. 5, in the Thunderdome.

Both teams made 10 two-pointers and eight free throws. But the Streaks sank seven treys for 21 points to only one for three points for the Bulldogs, for the 18-point difference.

Archbold grabbed an early 7-1 lead on deuces by Ethan Hagans and Elijah Zimmerman and a three by DJ Newman.

Edgerton scored five straight points to pull within one, 7-6.

Zimmerman pushed the lead to three, 9-6, but the Dogs scored four straight points for their first lead, 10-9.

Zimmerman scored on a layup for the final points of the first quarter and an 11- 10 lead.

The Streaks scored the final four points of the half for an 18-15 advantage at the half.

“We didn’t shoot the ball well in the first half, and we were still ahead by three points,” said Frank.

AHS took control of the game in the third, outscoring the Bulldogs 22-10, including four treys to go up 40-25 after three.

The reserve players finished the game as the Streaks outscored Edgerton 9-6 to win 49-31.

“We’re still feeling our way through this process,” said Frank.

“We aren’t anywhere near where we’re going to be conditioning wise and healthwise, so we’re just trying to battle through some things and just keep competing.

“We’ll continue to get better, and hopefully that’ll be good enough to keep us in games.”

Zimmerman led all scorers with 13 points.

The Wildcats invaded the Thunderdome, Saturday, Dec. 7, for a non-league contest.

Archbold outscored the Wildcats 14-11 in the second to go into the locker room up 25-24.

The Streaks won the rebounding battle 29-15.