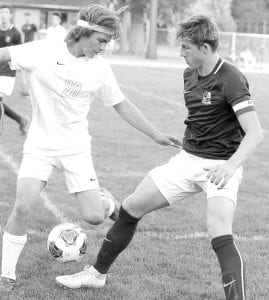 Senior Elijah Zimmerman, shown earlier this season, scored a goal in Archbold’s 7-0 win over Evergreen, Tuesday, Oct. 8. It was the 150th victory for the AHS boys soccer program.– photo by Mario Gomez

The Streaks (11-4-1) jumped out to a 5-0 lead en route to a 7-0 victory that clinched a fifth straight NWOAL title and the program’s sixth overall with a 5-0-1 league record.

“Our first priority every season is to compete for a league title,” said Sean Stewart, AHS head coach.

“Being able to consistently compete for the league and bring home five in a row is something our program and school can be proud of.

“We’ve had some excellent teams, and that success puts pressure, in a good way, on us each year.”

The Blue Streaks got on the board with just over two minutes off the clock on a Trey Theobald goal.

The Streaks extended the lead to 3-0 with goals from Ethan Hagans and Silas Whiteman.

Krayton Kern and Elijah Zimmerman finished the half with goals of their own for a 5-0 lead.

Theobald scored his second goal early in the second half.

Jarrett Waidelich put the finishing touch on a victory with the final goal.

It was the 150th win in the program’s ten-year existence. Stewart has been at the helm for every victory.

“We have certainly had a lot of talented players and strong teams over the past 10 seasons,” said Stewart.

“Most importantly, we’ve consistently had great kids that buy into the team mentality and work for each other, their school, and the community.

“One hundred fifty wins is no small feat in ten seasons, and it’s something our current players and all of our alumni can be proud of.

“The challenge will be to continue that success; always pushing to be better.”