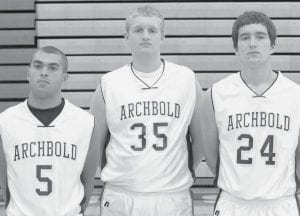 The Archbold boys basketball team returns three letterwinners when the 2008-09 season kicks off.

Krauss has spent the last 24 years at the helm of the Blue and Gold. He has compiled a 380-160 record along with numerous sectional, district, and regional titles; a state runnerup trophy in 1995-96; plus 11 Northwest Ohio Athletic League titles.

The Streaks start the season as defending NWOAL champs, winning the prize last season with a perfect 8-0 mark.

The Blue and Gold finished last year with a 20-5 mark before losing to Ottawa-Glandorf in the regional final.

"We have three senior lettermen who received valuable playing time last year," said Krauss. "We expect these seniors to be our leaders at both ends of the court."

"We graduated our point guard, Justin Rupp, which is a key position on the court. We’ll need to have someone step up and contribute at that position," said Krauss.

"Also, after losing a majority of our scoring last year with Gene, Trey, and Justin, we’re going to have to score some points somehow…and it’ll be interesting to see how we develop in that area."

Krauss said this year’s team is not big, and will rely on team quickness to provide the squad with that extra edge, along with the team’s foul shooting to win the tight games.

The AHS mentor points to his bench as one of the team’s strengths.

"Depth will be a strength, as we feel we have a number of underclassmen who will have an opportunity to contribute this year," he said.

"We’re looking for guys that are going to hustle and play with a lot of energy."

Krauss said, "With our experience, we should be able to realize that team chemistry is important, and that being able to accept a role on the team is key.

"Last year’s team was very successful, and it was due to our team members understanding their roles, and they did them well.

"This year, like always, we hope to develop into a balanced team offensively, although right now we have a lot of questions in that area.

"We’ll be as good as our defense. Last year we gave up 44.1 ppg, which was pretty good. We’ll need to work hard to keep our defensive intensity up and give ourselves a chance to compete."

"With this team, playing with energy, passion, and intensity each night will give us an opportunity to compete. I feel we have a good mixture of players who will demonstrate the ability to play tough and play together."

In the NWOAL, Krauss thinks the league may be down a bit this year and looks at Evergreen to be the favorite. Bryan, Wauseon, Patrick Henry, and hopefully Archbold will be in the mix as well.

The Streaks host Wauseon, Saturday, Dec. 6, in their season opener.