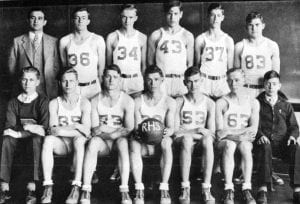 Holding the basketball in the middle of the front row in this photo of a mid-1930s Ridgeville High School basketball team is George Hoffman, great-grandfather of current AHS basketball players AJ Mahnke and Andrew Hogrefe. Hoffman graduated in 1935. Mahnke and Hogrefe can trace their roots back to the first RHS graduating class in 1906.– courtesy photo

When the Archbold High School varsity boys basketball team put on the uniforms of the Ridgeville Falcons, Saturday, Feb. 2, a connection that reaches back more than 100 years was made.

The Ridgeville School District, which started in 1841, was consolidated in 1969. Some Ridgeville students were transferred to Archbold.

Archbold schools honored the history of Ridgeville High School by dressing the junior varsity and varsity teams and cheerleaders as Falcons for Ridgeville Falcons Night.

Clara was a member of the first RHS graduating class of 1906. Until he was 13 years old, Andrew and his family lived in Clara’s house. 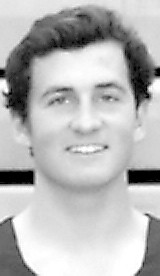 Andrew and AJ’s greatgrandparents, George Hoffman and Mathilda (Cordes) Hoffman, played basketball for RHS when the Falcons played in Giffey Hall. George graduated from RHS in 1935; Mathilda was a member of the Class of 1938.

AJ’s grandfather, Larry Mahnke, also played basket- ball as a Falcon. His wife, Pat (Hoffman) was a cheerleader. They graduated in 1962.

AJ’s father, Rob, graduated from Napoleon High School in 1985. He coached boys basketball at Tinora High School, taking a team to the state finals in 2009.

Nancy’s son, Tom, went to kindergarten at Ridgeville, and graduated from Archbold in 1985.

Her son, Tim, Andrew’s father, attended seventh and eighth grades when they were located in the Ridgeville school building.

Tim was a member of the 1988 AHS state champion football team. He graduated from AHS in 1989. 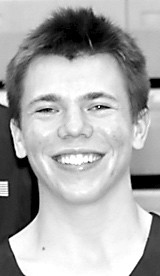 It is generally agreed, that few men are made better by affluence or exaltation.– Samuel Johnson