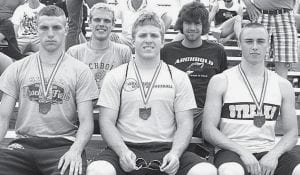 The boys 4×200-meter relay team was the only Archbold representative to finish in the top eight or better.

The AHS boys were pleased with their performance and can’t wait until next year.

“I’m very impressed with their effort,” said Shrickel. “It was tough to make it out to fi- nals, but the best thing about the boys is they’re all coming back next year. I’m looking forward to next year.”

Fidler, Price, and Waidelich are juniors; Hammersmith a sophomore. The four also are the members of the 4×100 team. 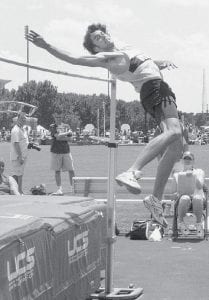 Top left: Colin Shannon, a senior, placed 14th in the high jump. Bottom left: Michael Volkman, far right, placed 10th in the 800. Top right: Breon Price takes the handoff from Nate Hammersmith in the 4×200. The relay placed sixth. Middle right: Autumn Lantz, left, ran in the preliminaries of the 100 and 200, but failed to qualify for the finals. Bottom right: Members of the 4×200 that placed sixth are, from left: Garrett Waidelich, Nate Hammersmith, Breon Price, and Jacob Fidler.- photos by Jack Frey and courtesy AHS yearbook

The AHS boys 4×100 finished 10th in the preliminaries and didn’t advance to the finals.

“I accomplished my goal,” said Volkman. “I wanted to PR (personal record) and have fun. It’s a good experience running at state, and I’m glad I had the opportunity.”

“Michael ‘PRed’ (had a personal record) with a secondfaster time than what he had at regionals,” said Downey. “Last year that time would’ve gotten a place on the podium, but this was a fast year.”

The only senior going to state was Colin Shannon. His jump of 6 feet, 2 inches in the high jump placed him 14th; the height matched six other jumpers. 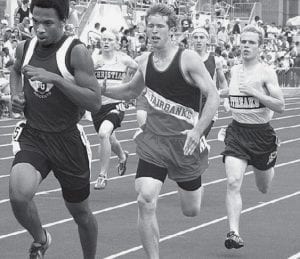 Cory Vales of Stewart Federal Hocking won with a jump of 6-10.

“This was a great way to end my high school career,” said Shannon. “I really enjoyed being on the state track. It was really neat that people came down to Columbus to watch me jump.”

“Colin had an okay state meet, but more importantly had a great season getting the outdoor high jump record,” said Downey.

Autumn Lantz, a sophomore, had a disappointing trip to state. She failed to qualify for the finals in the 100 or 200.

“Autumn was disappointed in her performance, but had a great year,” said Downey. “Throughout the season she set new school records in the 100 and 200.”

Lantz, Shannon, Volkman, Hammersmith, Fidler, and Waidelich also received academic all-Ohio awards. The award goes to athletes that have a grade point average of 3.5 or higher, qualified for the state meet, and was a sophomore, junior, or senior. 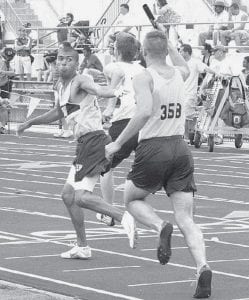 “Not only are they good athletes, they’re good students,” Downey said about the academic award recipients.

“I’m real pleased,” said Downey. “Everyone that got down here deserved it.

“There was actually others deserving that didn’t get here. Six out of the seven athletes are underclassmen, so the future looks bright.

“We have good kids coming up, so we’re looking forward to a great season next year.” 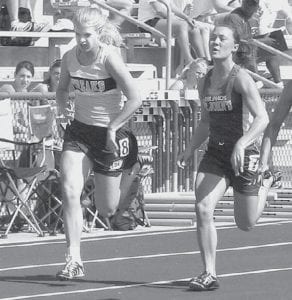 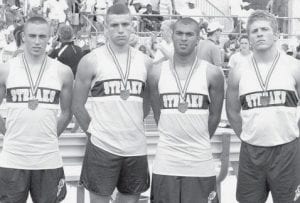