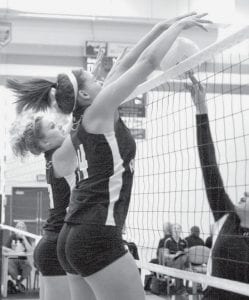 Devin Newman, left, and Hailey Galvan block the spike of an Otsego player at the Streak Spike-Tacular, Saturday, Sept. 27. AHS finished fourth in the tourney.- photo by Mary Huber

Archbold traveled to Wauseon, Tuesday, Sept. 23, for a Northwest Ohio Athletic League match with the Indians.

AHS and Evergreen are tied for the lead in the NWOAL with 5-0 records.

Archbold was on the road to Kalida, Thursday, Sept. 25, for a match with the Wildcats, who are ranked sixth in Division IV in the state coaches poll.

Archbold hosted the 14th annual Streak Spike-Tacular, Saturday, Sept. 27. Archbold and Kidron Central Christian had battled in the finals every year since 2000, but this year Otsego took on the number one-seeded Crusaders in the final.

Playing fourth-seeded Gibsonburg in the battle for third, the Golden Bears took control to win in two games, 25-21, 26-24.

Hailey Galvan led AHS with 19 kills. Devin Newman had 13; Emily Snyder had 10, and Andrea Allan had nine. Stacy Wyse and Snyder each had three solo blocks.

Allan served two aces; Jenna Nofziger and Deena Cowell each had one.

The loss dropped Wauseon to 1-4 in the NWOAL.

No statistics were available for Archbold.

Galvan had 10 kills and one solo block. Newman had two solo blocks and three kills. Melinda Sauder had four kills; Snyder had three.

After Archbold jumped out to an 18-12 first-game lead, the Knights closed to within four, 20-16, before a Snyder kill gave the serve back to the Streaks. Newman’s kill raised the score to 21-16, but a kill by Bernthisel gave the serve and a point back to Otsego.

With AHS ahead 23-19, Galvan had two straight kills to end the game.

Game two started with AHS sprinting out to a 10-4 lead when the Knights began their comeback.

The Streaks held a 22-19 advantage when a too-long spike gave the serve back to Otsego at 22-20. A Bernthisel kill, followed by a Streak spike into the net, tied the score at 22.

After an Archbold time-out, Otsego took a 23-22 lead. Another Streak spike went long, and Otsego was at game point, 24-22.

Snyder’s kill gave the serve back to Archbold with AHS down 24-23.

Newman’s spike was blocked by Bernthisel, and the ball fell into a hole in Archbold’s defense for game point.

The third and deciding game stayed close until Otsego took a 17-12 lead. The Streaks came back and tied the game at 20 as Snyder blocked a Bernthisel spike.

After Otsego came back and tied the score at 23 with a block at the net, Berry served an ace. At match point, Wyse’s spike was blocked by Chelsea Bollenbacher for the Otsego victory.

The Golden Bears finished third with a two-game victory over AHS.

Snyder had eight kills, while Newman had seven and Wyse had five. Snyder had two solo blocks, and Wyse was 59/60 in setting.