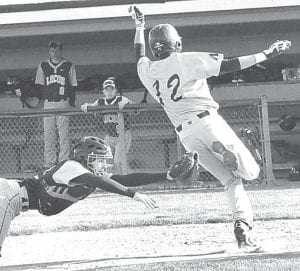 Archbold traveled to Montpelier, Wednesday, April 13, and picked up an 8-5 nonleague win.

Archbold led 8-0 heading into the bottom of the fifth when the Locos got hot, scoring one run in the fifth and three in the sixth to close the gap to 8-4.

The Locos closed out the game with one run in the seventh.

Babcock recorded the win on the mound, giving up just one hit and striking out one in two innings.

Bucklew (2-0) was the winning pitcher. In six innings he allowed two runs on three hits, struck out five, and walked seven.

D. Walker (0-1) was the losing pitcher. In 2/3 inning he allowed one run on one hit and walked one. Babcock pitched in relief; in 6 1/3 innings he allowed seven runs on seven hits, struck out four, and walked four.

At the plate, T. Walker and Radabaugh each had two singles, with Radabaugh recording an RBI. Bucklew had a two-RBI single.

In the opening game of a Saturday, April 16 doubleheader at Perrysburg, Archbold committed five errors in a 7-3 loss.

Archbold rebounded in the second game behind pitcher Trevor Rupp.