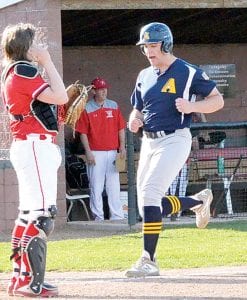 Bryan, Evergreen, and Liberty Center are in a threeway tie for second at 4-2 with one game remaining.

Rigo Ramos (7-1) got the win on the mound. In 5 2/3 innings he allowed four runs on seven hits, struck out eight, and walked one.

Kern went 4-4 at the plate, including a double and a run batted in. Erbskorn went 3-4 with five RBIs.

Travis Ziegler, Aiden Warncke, and Kern each pounded out four hits as AHS had 18 total hits. One of Warncke’s hits was a double.

Ziegler and Warncke each had two RBIs. Kern had four and TJ Rice, one.

Warncke (3-0) was one out away from a complete game shutout when the Patriots scored with field conditions getting very slippery from rain, Thursday, April 25, at PHHS.

Warncke allowed one run on seven hits, struck out nine, and walked two.

AHS had six hits. Jeron Williams went 2-4 with a single and a double.

Kern had a double; Mitch Grosjean, Drake Mohring, and Kreighton Sims each had base hits.

The Streaks traveled to Anthony Wayne for a doubleheader with the Generals and Ottawa Hills, Saturday, April 27.

Williams hit a home run in the first inning and Kern blasted a three-run bomb in the third to lead the Streaks past Division I Anthony Wayne 5-4.

Hagans improved to 3-0 on the season with the win. In 2 2/3 innings he allowed two runs on three hits, struck out one, and walked two.

Williams also came on in relief to shut down the Generals.

In addition to Williams’ home run, he also had two base hits. Grosjean had a double and a single.

In Archbold’s second game, Sims settled down after surrendering three first-inning runs and shut out the Green Bears until the fifth inning. Rice came on in relief to get the save as the Streaks beat the Green Bears 5-4.

Sims allowed three runs on six hits, struck out three, and walked one.

At the plate, Ziegler and Erbskorn each had a double and an RBI. Williams, Galvan, & Kern each drove in a run.