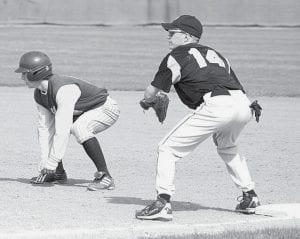 Archbold’s Jack Downey, left, is held at first base by Pettisville’s Logan Frey in one of the Blue Streaks’ non-league contests with the Blackbirds last week.- photo by Scott Schultz

The Archbold baseball team had a full slate of games last week, marching through the competition until dropping both games of a Saturday, April 19 doubleheader with Perrysburg.

The Streaks stand 7-3, 1-0 in the Northwest Ohio Athletic League.

The Bulldogs (2-2 0-1) crossed the plate first, scoring two in the top of the third. The Streaks bounced right back with two runs in their half.

Archbold’s Steven Kinsman scored on a fielder’s choice in the bottom of the eighth to pick up the league opener for both squads.

Kinsman garnished the win. In 3 2/3 innings he gave up zero runs on one hit and struck out three.

The Bulldogs out-hit the Streaks 3-2. Kinsman and Paxson Miller led AHS with one hit each.

P. Miller picked up the win, Tuesday, April 15 over visiting Edon. Going four innings he gave up one run on six hits, struck out four and walked three. Collin Walker pitched one inning, giving up one run on three hits, striking out one, and walking one.

Edon crossed the plate once more, in the fifth, for the 13-2 final.

David Dominique paced Archbold with three runs batted in, going 2-2 at the plate. P. Miller went 2-3 with 2 RBIs. Jeremy Neuenschwander went 2-2 with a double and 1 RBI.

The Streaks combined for 11 hits while the Bombers mustered nine.

Archbold held off Pettisville 6-4, Thursday, April 17 at Archbold. Scoring two in the bottom of the first, the Streaks added one run in the fourth and three more in the fifth.

The Birds picked up a pair of runs in the top half of the third and rallied for two more in the seventh for the 6-4 final.

M. Miller picked up the win, giving up five hits and striking out five in five innings. Collin Walker went 1-3 with a triple and 2 RBI’s. Corey Walker added a double and 2 RBIs.

D. Rupp and Kinsman each went 2-3 with Rupp recording 1 RBI.

Archbold picked up a 19-8 win at Pettisville, Friday, April 18, in a non-league slugfest. The Streaks pounded out six hits to the Birds’ seven, but Pettisville was plagued by seven errors.

P. Miller picked up the win, going 1 1/3 innings, giving up no runs on no hits and striking out one. Rupp and Jeremy Neuenschwander also made appearances on the mound. Rupp went 2 2/3 innings and gave up five runs on five hits and struck out five while walking four. In one inning Neuenschwander gave up three runs on two hits and walked two.

Logan Frey picked up the loss, giving up seven runs on three hits, striking out four, and walking three in 3 2/3 innings. Also on the mound were Zane Miller, Quinn Nofziger, and Kyle Graber.

At the plate the Birds were led by Andy Switzer, who was 2-3, and Jordan Klopfenstein, 1-3 with one double.

The Streaks hosted Perrysburg, Saturday, April 19 and dropped the opening game 15- 10. Perrysburg exploded for seven runs in the second inning and four more in the third on their way to the victory.

In the second game the Streaks opened with a 2-0 lead after the first inning. Perrysburg added its runs in the second and third innings to take a 4-2 lead.

Perrysburg added two more in the sixth. The Streaks closed the gap in the seventh, scoring three runs, but fell short.

Rupp suffered the loss, giving up three runs on two hits, recording one strikeout, and one walk in one inning. Archbold scattered six hits in the game.