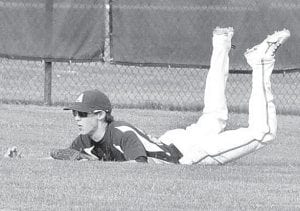 Jase Grosjean makes a diving catch for an out in Archbold’s NWOAL matchup with Wauseon, Thursday, May 2.– photo by Mario Gomez

The Indians (14-3), ranked sixth in Division II by the Ohio High School Baseball Coaches Association, assured themselves of at least a share of the league title with a 4-2 defeat of the Blue Streaks.

Earlier in the week, Archbold defeated Montpelier in a league contest and recorded two non-league wins to raise its record to 16-3, 6-1 NWOAL.

The Streaks traveled to Ottawa Hills, Saturday, May 4, for a non-league game.

The Green Bears were ranked 19th in Division IV by the OHSBCA.

AHS crossed the plate twice in the top of the eighth to win 5-3.

At the plate, the Streaks totaled seven hits. Zach Short and Jase Grosjean had two singles each, while Emerson Radabaugh and Tyson Schnitkey each had one.

Short, Radabaugh, and Schnitkey each had a runbatted in.

After two scoreless innings at Wauseon, Thursday, May 2, the Streaks scored first, taking a 2-0 lead in the top of the third as Micah Bernath hit a two-run single.

The Indians, behind power hitter Ty Suntken, knotted the score with one swing of the bat as he blasted a tworun homer in the bottom of the inning.

Wauseon took the lead in the fourth on a Dugan Shadbolt RBI double.

In the fifth, the Streaks walked Suntken. A wild throw advanced the Indian to second base.

Josh Cales, the second half of Wauseon’s double threat at the plate, hit a line drive to center field that sent Suntken home, giving Wauseon a 4-2 lead that held.

The Streaks scattered four hits, while Wauseon had six.

Archbold traveled to Stryker (3-7), Wednesday May 1, to finish a game that was suspended due to weather, Tuesday, April 23.

After eight wild innings, AHS snuck out with a 13-9 non-league win.

The Streaks led 3-0 after the top half of the first inning, but the Panthers came roaring back with four runs of their own in the bottom of the inning.

Archbold scored one in the second to knot the score at 4, but Stryker crossed the plate twice for a 6-4 lead.

Both teams scored two runs in the fifth for an 8-6 Panther lead.

The Streaks tied the score at 8 with two runs in the sixth and crossed the plate five times in the eighth.

The Panthers weren’t able to rally from the 13-8 deficit, scoring just once for the 13-9 final.

At the plate he had two singles and two RBIs.

Archbold traveled to Montpelier, Monday April 29, and picked up a 10-1 NWOAL win.

Walker picked up the win, pitching a complete game and giving up one run on two hits, striking out 10, and walking one in seven innings.