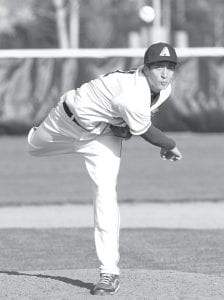 The Archbold baseball season got underway last week with Archbold posting a 3-1 record.

All non-league contests, the Streaks recorded wins over Fairview, Montpelier and North Central.

Behind the arm of Tyson Dietrich, the Blue Streaks opened with a 4-1 win over visiting North Central, Thursday, March 29.

Tanner Wyse hit a pair of singles in four trips to the plate. Dietrich added a double; Evan Wyse went 1- 3 with a run batted in, and Jase Grosjean went 1-1.

Archbold totaled 17 runs on 14 hits in a non-league contest at Montpelier, Friday, March 30.

T. Wyse recorded the win, giving up five runs on eight hits while striking out seven and walking one.

In the first game of a Saturday, March 31 doubleheader with Fairview at Archbold, Britt Fitzwater pitched a three-hit shutout to blank the Streaks 3-0.

AHS mustered just three singles as Tyson Schnitkey picked up the loss. In five innings he gave up two runs on three hits, struck out six, and walked two.

The Streaks blasted nine runs in the sixth inning to break a 1-1 tie on their way to a 10-1 victory in the nightcap, handing the Apaches their first loss.

Price recorded the win. In 6 1/3 innings he gave up one run on one hit, struck out four and walked eight.