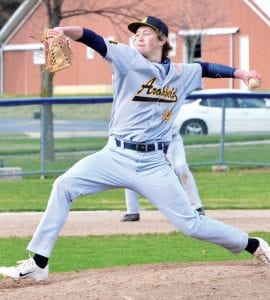 Aiden Warncke got the win on the mound when Archbold defeated Swanton 11-3 for its second NWOAL victory of the season, Thursday, April 11.– photo by Mario Gomez

The Archbold baseball team is on an eight-game win streak after beating Bryan, Swanton, and Perrysburg last week.

Rigo Ramos allowed only one hit with 14 strikeouts in six innings as Archbold upset Bryan 5-3, Monday, April 8, at Memorial Park.

The Golden Bears, who dropped to 3-5, 0-1 NWOAL, were the preseason pick to win the Northwest Ohio Athletic League.

“Everybody knew how big a game this was, and our kids responded really well,” said Dick Selgo, AHS head coach.

“Rigo was dominant on the mound, and Aiden Warncke came on in relief with the bases loaded in the seventh inning, and got three consecutive outs to end the game.

“That wasn’t an easy situation to come into, but Aiden came through for us in a big way.”

Archbold led 2-1 after one and added a run in the third, fifth, and sixth innings to go into the seventh up 5-1.

Bryan scored twice in the top of the seventh for the 5-3 final.

The Streaks had eight hits. Mitch Grosjean had a single and a double; Holden Galvan had a double with a run batted in. Cory Erbskorn had two singles with two RBIs.

Drake Mohring and Kade Kern each had a single with an RBI.

Warncke got the win on the mound. In five innings he allowed three runs on four hits, struck out five, and walked four.

AHS had nine base hits. Erbskorn and TJ Rice each had two, while Jeron Williams, Kern, Galvan, Travis Ziegler, and Ramos each had one.

The Streaks recorded an 11-0 one-hit shutout of Perrysburg, Saturday, April 13, at Fifth Third Field in Toledo.

Ramos got the win as he pitched 3 2/3 innings and allowed no runs on no hits, struck out eight, and walked none.

AHS had 18 hits. Kern and Grosjean led the hit parade with each hitting a double and two singles.

Rice had three singles. Williams and Galvan each had two singles.

Erbskorn, Kreighton Sims, Clay Nafziger, Mohring, and Chase Kohler each had a base hit.