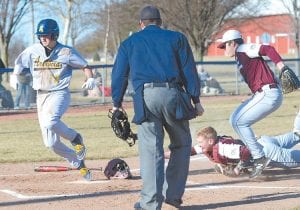 Mitch Grosjean scores the first run of the season for Archbold in the Blue Streaks’ 9-1 win over Edgerton, Monday, March 25.– photo by Mario Gomez

The game was scoreless going into the sixth inning. The Apaches scored four runs in the bottom of the inning as Caleb Frank got the complete game shutout.

Rigo Ramos suffered the loss on the mound. In five innings he allowed four runs on four hits, struck out seven, and walked one.

The Streaks had five hits, led by Kreighton Sims, who went 3-3.