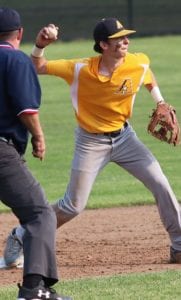 Jeron Williams, pictured at left, steps on base to get Coldwater’s Myles Blasingame out at second. He then fires the ball to first base, pictured at right, where the throw to Kreighton Sims beats Jacob Wenning and completes the double play. The action was in the fourth inning of the Division III regional final. The ball had been hit to pitcher Rigo Ramos, who threw it to Williams.– photos by Mary Huber

Then they came back from a 3-0 deficit to defeat the Streaks in the Div. III regional baseball championship game.

Archbold’s baseball season came to a sudden halt Friday, May 31, in the regional finals at Elida, as the Blue Streaks lost a 5-4 heartbreaker in eight innings.

Archbold blanked Upper Sandusky 3-0 in the semifinals on Thursday, May 30, to get to the championship game.

Rigo Ramos, Ethan Hagans, and Jeron Williams combined on the mound to shut out the Rams, who finished the season 22-6.

Dick Selgo, AHS head coach, elected to go with the same pitching format that worked so well in the district tournament.

Hagans came in for four innings and maintained the shutout until Williams came in and closed out the final 1 2/3 innings. 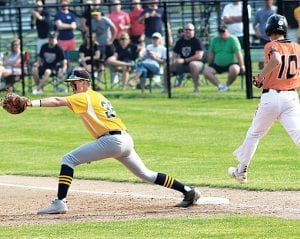 The game was scoreless until the fifth inning, when TJ Rice ripped a double that scored Mitch Grosjean, from first base with a two-out single.

Kreighton Sims then laced a single to score Rice to give the Streaks a 2-0 lead.

“That was a big weight off our guys’ shoulders, to finally get a couple runs,” said Selgo.

“We were used to scoring so many runs this year that we were starting to press a little bit.”

Williams and Holden Galvan singled to lead off the seventh inning, and Cory Erbskorn drove Williams in with a single to give Archbold its third and final run.

“Coming in here, we knew it was going to be a tough game,” said Scott Emerick, Upper Sandusky head coach.

“I think (we) played a tough game against the number one team in the state. We had people in scoring position several times, and then we hit a ball hard and then just hit it right to them. 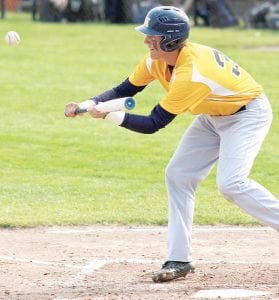 Travis Ziegler hits a sacrifice bunt to advance Cory Erbskorn from first base to second in the second inning of Archbold’s regional final with Coldwater.– photo by Mary Huber

“We had our chances.

“We had just as (many) chances as they did to score. They just got the hits when they needed them. We didn’t.

“They made the plays they needed to when we had the runners in scoring position.”

With the Streaks ranked number one by the Ohio High School Baseball Coaches Association and Coldwater ranked number two, the game promised to be a nailbiter, and it delivered.

The Streaks scored first, in the second inning. Erbskorn led off with a walk, was sacrificed to second by Travis Ziegler, then was driven home by a hot-hitting Grosjean.

Williams and Kade Kern had hits in the third inning. Williams scored on a throwing error by the catcher, while Kern scored on Ziegler’s two-out single, giving Archbold a 3-0 lead. 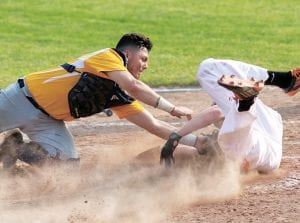 Blue Streak catcher Holden Galvan tags Coldwater’s Will Broering out at home plate to prevent a run in the seventh inning of Archbold’s regional final with the Cavaliers.– photo by Mary Huber

Some excellent pitching by Ramos, aided by two double plays, kept Coldwater off the scoreboard until the top of the seventh inning.

Archbold was three outs away from making its second ever trip to the state tournament when the Coldwater bats finally got hot.

The Cavaliers pounded out six hits off three different pitchers to score four runs in the top of the seventh, to take a 4-3 lead over a stunned Archbold team.

Ramos had held the Cavaliers to only two hits up to that point.

Down to their last out, the Blue Streaks got a walk from Galvan and a game-tying double from Kern to send the game into extra innings.

However, it was shortlived as Coldwater scored a run in the top of the eighth inning and held Archbold scoreless to capture the regional championship.

“That’s as tough as they get,” said a dejected Selgo.

“I feel so bad for our guys. They wanted this so badly, only to have it ripped away in the last inning. 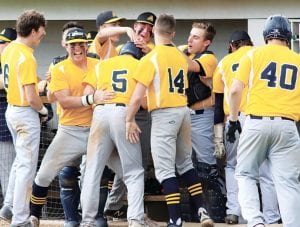 The Blue Streaks surround TJ Rice (5) after the senior scored in the fifth inning of Archbold’s regional semifinal with Upper Sandusky. Kreighton Sims’ hit to center field gave Rice the opportunity to score from second and give AHS a 2-0 lead.– photo by Mary Huber

“We had ten seniors, and a number of underclassmen, that gave it everything they had, day in and day out.

“Those seniors were passionate about baseball. They poured their hearts and souls into this team.

“As a coach, I could not possibly have asked for anything more. They will be missed more than anyone can imagine.”

“We preached all year about being mentally tough, and our motto all year was ‘finish strong.’ We found a way today to get four (runs) in the seventh (and) take the lead.”

Those ten, along with underclassmen Kern, Drake Mohring, Hagans, Chase Kohler, and DJ Newman had one of the best seasons in Archbold history with a record of 26-4.