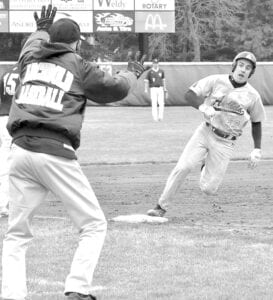 Jaybe Burkle rounds third base, but is stopped by Dick Selgo, AHS head coach, left. Burkle scored the first run of a two-run third inning in the first game of a doubleheader with Ottawa- Glandorf, Saturday, March 27.– photo by Mario Gomez

The Streaks won the opener, 3-1. Scoring twice in the third inning and once in the fifth, Archbold allowed the Titans only one run in the seventh.

DJ Newman got the win on the mound. In four innings he allowed no runs on no hits, struck out nine–all in the fourth inning– and walking none.

Archbold had seven hits, and were led by Caleb Hogrefe with two singles and a run batted in; Newman, double, RBI; Jayden Seiler, single, RBI; and Devon Morris, double.

In the second game, O-G led 10-7 after the fifth inning before AHS scored two runs in each of the sixth and seventh innings to win 11-10.

Ashton Kammeyer walked with the bases loaded in the bottom of the seventh to force in the winning run.

The score was tied at 5 after the first inning. Archbold scored a run in the bottom of the third to lead 6-5, but the Titans scored five more runs in the top of the fifth.

One run in the bottom of the seventh closed the gap to 10-7.

Morris was the winner on the mound. In two innings he allowed no runs on one hit, struck out four, and walked one.