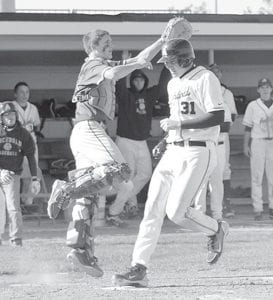 The Archbold baseball team picked up one Northwest Ohio Athletic League victory last week and split a pair of non-league games to stand at 13-7, 4-1 in league play.

Archbold dropped Swanton in league action, picked up a win over Paulding, and lost to Perrysburg. AHS 11, Swanton 1

Archbold tallied single runs in the first three innings, and added two in the fifth and six in the sixth.

The defensive play of Evan Wyse at third base helped the Streaks get out of a bases-loaded jam in the fifth to hold the Bulldogs to just one run, which came in the sixth.

Michael Walker (1-1) pitched a complete game, a four-hitter. He gave up one run with four strikeouts and two walks.

He allowed five hits and struck out 12.

The Streaks traveled to Perrysburg, Thursday, April 26, and suffered a 4-2 nonleague defeat.

The Yellow Jackets had four hits while the Blue and Gold had five.

At the plate, Kolin Schilt and T. Wyse each had RBI singles.