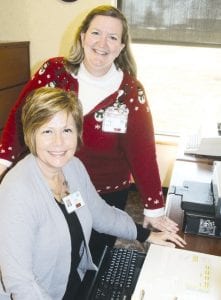 When the Fulton County Health Center Board of Directors offered Patti Finn the job of chief executive offi cer, she said yes.

Later that evening, back at home, she asked herself, “What did I say yes to?”

But she probably knew more than most. In addition to serving for 12 years as an assistant to Dean Beck, CEO for decades, Finn has been with FCHC for 29 years.

She started working there even before she had graduated from Bowling Green State University.

In her senior year at BGSU, she did an internship in medical records, which today is called health information.

Over the years, she’s seen a lot of changes. One of the biggest to affect hospitals was a switch from inpatient care to outpatient service.

Companies that provide medical insurance prefer to have patients stay out of the hospital, she said. The majority of FCHC patients, 70%, are treated on an outpatient basis.

“I don’t see any change in that,” she said. In fact, she sees more people receiving medical treatment in their homes.

But at the same time, “There are times when a person is really sick, and needs to be in the hospital,” she said.

“We’ve expanded buildings, and our services.”

Future expansion of the FCHC campus is on hold, “but never say never,” Finn said.

For example, Finn said FCHC could use more medical office space to serve out-of-town physicians who want to have office hours at the health center, making it more convenient for their Fulton County patients.

“There is a demand for that,” she said.

“We’re starting to run out of space for doctors who want to come out. Space is getting limited.

“At some point in time, we’d like to add independent living units” to Fulton Manor.

“More of a condo-apartment style,” she said.

Also growing are demands on hospitals.

As an example, Finn said the federal government now requires hospitals to do community health assessments.

The assessments require an evaluation of community health needs, evaluation and priority of the findings, and then developing programs to address the needs.

The program operates on a three-year cycle. After three years, the process starts all over again.

“If we accomplish all we’re supposed to accomplish, we won’t have any patients,” she said.

Finn said FCHC is working with other agencies, including the Fulton County Health Department, on the assessment, which is just about complete.

Unfortunately, while the government wants FCHC to complete the assessment, it did not provide any money to do the work.

“It’s an unfunded mandate,” she said.

No interview of a health care professional is complete without a question about “Obamacare,” the Affordable Health Care Act backed by Barack Obama, US president.

“The problem right now is they passed the law, but there are no regulations to go with the law. They’re still working on the regulations,” she said.

“We don’t know ultimately how it will affect us.”

FCHC officials want to see the requirements, evaluate them, and make preparations.

“What are we going to do if this happens? What is the cost to it?

She asked if “Obamacare” would be financed by a new tax on hospitals, the general public, or the providers of medical equipment.

“What’s scary is we think someone believes we have too much access to health care,” she said. “Hospitals will close. That really could happen.”

The nation of Canada has the same number of CAT (Computerized Axial Tomography) scanners as we do here in northwest Ohio. Some might consider this too much health care, she said.

Across the region, hospitals are merging and combining. Today, there are two big health care provider networks: Promedica and Mercy. Both networks have facilities in Defiance.

FCHC, however, has remained an independent, non-profit organization.

Finn said FCHC has been able to remain independent because it’s a sole provider in the county, which has helped.

“Our patients– the people we serve– are dedicated to us,” she said.

Finn has been the CEO of FCHC for about three months. She’s learned a lot, she said.

The chief executive officer has a lot of responsibility. FCHC employs nearly 800 people. On a full-time equivalent basis, employment is between 350 and 400.

That makes the health center the second-largest employer in Fulton County, second only to Sauder Woodworking.

“With the way the economy has been going, many of our employees are female, and a lot of their spouses lost their jobs– and vice versa. We try to keep people working.”

At the same time, when a job at FCHC opens, it’s carefully evaluated to determine if it needs to be filled.

“It’s a family– I consider it family. I don’t know everyone here, but I know a fair share.

“For all of our employees, it’s not just a job. We like what we do. We love our patients. We do the best we can. People care.

“If I didn’t believe that, I don’t know if I could stay here.”