ACT’s Shrek For Young And Old 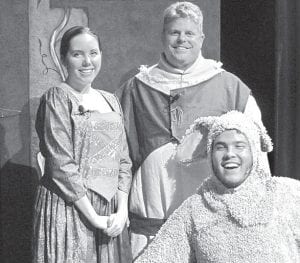 The three main characters in “Shrek the Musical are, from left: Myah Shaffer as Fiona, Steve Van Sickle as Shrek and Lorenzo McKeever as Donkey.– courtesy photo

Sometimes when a story moves from one performance venue to another, it falls flat on its face.

For example, when a book is adapted to become a movie, devotees of the book will often complain it was better.

Taking the animated movie characters from the Shrek franchise and putting them on stage would seem like a disaster waiting to happen.

But with the help of clever costuming and good acting, the audience buys into “Shrek The Musical,” sits back, and enjoys the show.

To transform Steve Van Sickle, Archbold, an ACT veteran, into the ogre Shrek, takes a green mask and ears, along with some outsized green gloves.

Later, when Princess Fiona, played by Myah Shaffer, Wauseon, transforms into an ogre, she, too, gets the green mask and gloves.

The actor who might have it the worst is Kyle Slagley, Bowling Green. He is cast as Lord Farquaad, who is so short he is the brunt of short jokes throughout the show.

To carry off the effect, Slagley, who is certainly not short, must spend most of his stage time on his knees.

Many performances make the show worth watching.

Van Sickle gives Shrek’s voice an accent, and doesn’t break from that accent when he sings.

Shaffer is a joy on stage. She has a wonderful stage presence, infusing Fiona with personality. Her singing voice has both power and color. She has the tools to go far.

McKeever does a great job with Donkey, the wisecracking, high-energy equine.

There are several other outstanding performances. Nicholas Mondelli’s Pinocchio is fun to watch, as is Seth Nofziger’s Gingerbread Man, or Gingy.

Megdalyn Mello, an Archbold third grader, is worthy of mention as Baby Bear. When called on to sing and dance, she does it with such excitement and enthusiasm, one ends up watching her and missing out on the rest of the cast.

There’s enough color and excitement on stage to keep children interested, but there are also some adult jokes and pop culture references to make grownups laugh.

Some of the best bits from the movie are in the show, including Farquaad’s interrogation of Gingy, where they perform the classic, “Do you know the Muffin Man?” sketch.

We do get more insight into some of the characters, but that’s just icing on the cake.

Once again, ACT has problems with the wireless microphones at the Archbold High School auditorium.

Not as bad as some other shows, it is still a distraction.

On opening night, Shaffer’s Fiona let loose with a jump for joy, and did something to her mic that caused it to buzz, then quit.

That’s not enough to keep audiences away from ACT’s “Shrek The Musical.”