ACT’s “Plight Before Christmas” Is Fun For The Holidays 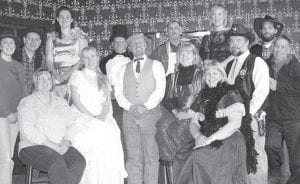 Those attending the Archbold Community Theatre production of “The Plight Before Christmas” will be subjected to more than a month’s worth of bad puns and stupid jokes.

But that’s part of the fun.

An old-fashioned melodrama, the show gives the audience the opportunity to boo the villain, played by John Taquino, Archbold, cheer the hero, played by Stan Short, Archbold, or sigh over the maiden in distress, played by Myah Shaffer, Wauseon.

Steve Van Sickle, Archbold, the show’s director, said he asks the cast of “The Plight Before Christmas” to “go far beyond the scope of reality, and become almost cartoon-like.

“More than half the cast has never even seen a melodrama, so it creates a fun challenge for all of us.

“We haven’t made it through one practice yet without the whole cast bursting out in laughter at some new antic from another cast member.

Others in the show include Bethany Collins, Pionner; Kathryn Lillie, Holgate; and Ed Mooney, Continental.