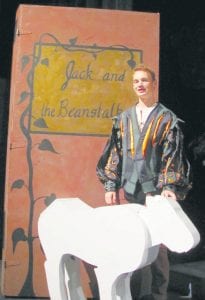 Caleb Wyse with the wooden cow he has to “lug around stage” for the Archbold Community Theatre production of “Into the Woods.” Wyse plays Jack, from the fairy tale, “Jack and the Beanstalk,” one of four fairy tales intertwined in the show.– courtesy photo

Caleb Wyse, 18, the youngest principal actor in the show, said, “You think fairy tales are just for entertaining children, but there are lessons to be learned.”

A baker and his wife have been cursed, leaving them childless. She desperately wants a baby.

“She thinks she can do anything to get her way. It doesn’t matter who she hurts or what happens. She ends up dying, so it makes an impression on you; what you do impacts others,” he said.

Little Red Riding Hood is eaten by the Big Bad Wolf. The baker cuts her out, but, Wyse said, “her character changes. She becomes darker. She fends for herself. She’s not the sweet girl she was.”

Wyse said his character, Jack, from Jack and the Beanstalk, is least affected by it all.

For Wyse, son of Dave and Jennifer, this is his 13th stage production.

His first was ACT’s “Sound of Music” in July 2009, the summer before his freshman year at Archbold High School.

“I started taking voice lessons because I wanted to be in ‘The Company,’” the AHS show choir.

“My voice teacher encouraged me to try out” for a part in “Sound of Music,” he said.

“I think I do both pretty well, but when I sing, I get nervous. When I’m playing a character, it’s not as bad,” he said.

“I just the love the aspect of entertaining people.

“I love the whole show– the lights, the costumes. I love how you can taken something that’s written down on paper and make a big production out of it.”

The cast of a stage show shares a special bond, almost becoming a second family.

That bond is different for high school and ACT productions, but still exists, he said.

“In high school, I see people (from the show) every day,” he said. “In ACT, there are people I don’t see very often, and in this show, I never met any of those people before.

“It’s fun, meeting new people older than me who have more experience, because I can learn from them as an actor.”

As Jack, Wyse is one of the principal characters. It’s the first time he’s had a principal role in a musical, he said.

Of course, in the fairy tale, Jack sells the family cow for magic beans.

“I have this cow in the show; it’s wood and about this tall,” he said, indicating about three feet.

“I lug it around stage. It’s on wheels, but sometimes I have to pick it up and carry it down steps.

“It’s a fun role. He (Jack) is naive and kind of corny; he finds giants in the sky and tries to tell people about them.

“It’s a different role from anything I’ve played; that’s cool for me as an actor.”

Yet, Wyse doesn’t see acting as a career. He wants to get a degree in education and work with children.

“If you major in theater, it takes up your whole life.”