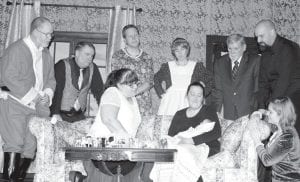 Archbold Community Theatre will give its audience a chance to laugh when “Happy Hollandaise!” opens Friday, Dec. 1.

In a press release, ACT officials describe the show as a British farce filled with visual humor and puns, along with a plethora of fun accents and a variety of characters ranging from an experienced actor of the British stage, to a German chef and a pair of burglars.

Hosenpfeffer is played by Robin Kiefer, Wauseon, a newcomer to the ACT stage. She said she has enjoyed the challenge of a German accent.

“The best part is hearing it coming out of my mouth when I’m not thinking about it,” she says. “The hardest part is consistency and being able to do it on command” when she hasn’t used the accent for a little while.

In the show, Claire’s carefully planned evening goes awry when her father, Phillip, played by Jeff Roth, Wauseon, gets bopped on the head by a nativity set and the veteran actor relives his favorite roles, resulting in hilarious consequences.

Among the guests is Father William Abbott, the new vicar, played by Paul Spencer, Defiance, and his wife Mary, played by Angelina Sorge, Wauseon.

“We innocently show up for dinner and get pulled into the shenanigans of the Finley household,” Sorge said.

“When you tell a joke and it hits, it’s nice to get that immediate feedback,” he said.

The shenanigans involve the impulsive Claire and her quirky brother George, played by Jason Westrick, Wauseon.

Van Sickle said she loves the close relationship her character has with her brother.

“They are there for each other no matter what,” she said.

“The closeness of the relationship is apparent at the very beginning when she says of her brother, ‘If this is to be the worst day of my life then he should at least be here to share it with me.’”

As if all of the “normal” antics aren’t enough, Tim Koenig, author of the play, adds in the bumbling Lone Wolf Burglar, played by Jeff Patterson, Archbold, and his apprentice, Irene, played by Lindsay Bialorucki, Ridgeville Corners.

“Larry (The Lone Wolf) is proud to show Irene the secrets of a second-story ‘person,’” Patterson, said, adding he “tries to keep up the legend of being a ‘lone wolf,’ but having someone to look over his shoulder might be secretly comforting.”