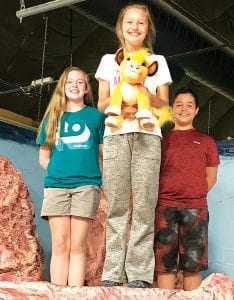 Meggie Mello, Hollyn Klopfenstein and Trace Schultheis, from left, stand on a set from the Archbold Community Theatre production of “The Lion King Jr.” ACT is employing a different rehearsal technique to prepare the young actors for the show.– courtesy photo

When a group of Lions band together, the group is called a “pride.”

Archbold Community Theatre is also using prides, but this time, they are groups of boys and girls rehearsing for the stage production of “The Lion King Jr.”

“The Lion King, Jr.” tells the story of Simba, a young lion cub that is next in line to rule Pride Rock, currently ruled by Mufasa, his father.

However, Scar, Mufasa’s brother, has more sinister plans for the father and son, leading to Mufasa’s untimely demise.

Mufasa is killed and Simba blames himself for his father’s death.

In a press release, ACT officials said the rehearsal process is set up as a workshop.

The children are learning different facets of theatrical production, from on-stage character development to various backstage processes required to put on the show.

Helping out with “The Lion King Jr.” are the parents of the young actors who are working on construction of sets and will usher for performances, along with other tasks.

“The Lion King Jr.” is derived from the Broadway production of “The Lion King.” That show was based on the original animated movie.