ACT: From Nomadic Thespians To Shows In Its Own Building 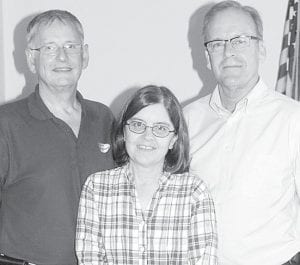 In the world of the theatre, there are special lights called “can lights.”

A form of spotlight, they look like empty cans with an opening on one end.

In the early days of Archbold Community Theatre, can lights were literally made from cans.

“We still use some of them.”

The history of ACT is a history of people making stories come to life on stage.

People like the late Charles Winzeler, a guidance counselor at Archbold High School.

In the late 1970s, Winzeler “had gotten some grant money and created “Friends of the Arts” to bring different types of arts into the community,” Short said.

“They had some concerts, an art show, and community theatre.

“The first year, they did a community theatre production of ‘Our Town,’ presented at the old AHS auditorium (now the middle school small gym).” 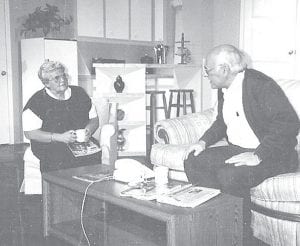 The late Mary Short, left, and her husband Theron, on stage during a 1980s production of “Squabbles.” Mary was one of the mainstays in the early years of ACT.– courtesy photo

“The second year, they did, ‘The Miracle Worker’ at the Ridgeville school building (now Christ Community Church).”

Short, whose college minor was theatre, said he had been living in the Toledo area for several years. He moved back to Archbold between Christmas and New Years, about 1979.

“Charles knew I was moving back, and he was short (Continued from first page) someone for the cast (of ‘The Miracle Worker’). He asked if I would do it, and I said yes.”

After two productions as “Friends of the Arts,” Archbold Community Theatre was formed in 1980.

Diane Phelps, Archbold, another ACT veteran, said in the early 1980s, Nona Liechty was the baby-sitter for her daughter Kimberly, who, at the time, was about five. Nona was in the ACT production of “Godspell.”

Diane and husband Bill took Kimberly to see the show. When ACT did its next production, Bill was a cast member.

For about 20 years, ACT was essentially “homeless,” performing on stages throughout the area.

Performances were at the Elmira School in Burlington Elmira (now The Candy Cane Christmas Shoppe), the Fayette Opera House, a church building in Pettisville, and at Central Mennonite Church.

“We were nomads,” Short said.

What equipment, props, and costumes ACT did keep were stored in a semi trailer.

As ACT grew, its storage space expanded to an unused room in the Sauder Woodworking complex, the second floor of the downtown bank building that is now Childs Investments, a room at the Elmira school, and other places.

As the years passed, ACT took on bigger challenges.

The musical “Barnum” was presented at the Fayette Opera House and was ACT’s first show featuring scene changes and “drops,” flat wooden frames covered with canvas that can be painted with scenery.

The drops are raised and lowered to represent scene changes.

For “Children of Eden,” ACT made it rain on stage.

“A guy came out from New York who had worked on Broadway, and he was amazed this little community theatre could make it work,” Short said. “Nobody slipped and fell. Everybody stayed dry.”

ACT has been very lucky to have in its ranks some very technically-talented people, the trio said.

Looking For A Home

As the years rolled by, ACT began looking for a permanent home.

At one point, ACT and others were considering purchasing the former Archbold Evangelical Church building, now the Templo Cristiano Assembly of God.

In fact, the Black Swamp Arts Council was formed as part of an effort to purchase the building and turn it into an arts center.

A feasibility study was even done.

“The sanctuary would have worked as a theatre,” Bill Phelps said.

“But when we heard what the utility bills were…” Short said.

Eventually, Marlene Nofziger, a real estate agent, contacted ACT with the idea of Giffey Hall in Ridgeville Corners. In 1999, papers were signed and ACT owned the building in downtown Ridgeville.

“There was a lot of ‘Oh my gosh, what are we doing?’” Bill Phelps said.

“We’d never had a bill, like a mortgage or utilities. It was a big step.”

“Initially, it was just for storage, rehearsals, and set-building,” Diane Phelps said.

During its previous life, Giffey Hall had been a basketball court, rollerskating rink, factory, a hall for wedding receptions and other gatherings, and a restaurant.

ACT took out the old restaurant kitchen, transforming it into a kitchen for caterers.

After some $3,000 heating bills, the ceiling was insulated. Insulation had to be specially ordered to fit the old roof.

A stage was built on the upper floor, with seating for 200.

Today, Archbold Community Theatre has developed a reputation for being a solid production company, putting on quality shows.

But it would not be where it is without the support of the community.

From major corporations to “just people who know and understand what we need,” ACT has received many, many donations, Bill Phelps said.

“Paint is so expensive,” he said.

“Someone will call us up and say, ‘I’ve got six partial gallons of paint– you want them?’ Yes, we do!”

Since 1980, ACT has put on about 100 productions, with hundreds, perhaps thousands, of people participating.

It is a labor of love, but sometimes, it feels like anguish, Diane Phelps said.

“It’s a rough road sometimes,” Bill Phelps said, “but when the curtain goes up, it makes it all worth it.”