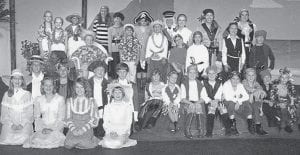 The production, which is not a musical, demands much from the young performers. Many children tried out for the play, which is directed by Faith Knapp, Bryan.

It is described as fun on the high seas and includes some suspense. The show runs about 90 minutes.

Plans for the 2008-2009 ACT season include the following productions: The Nunsense Christmas Musical Nuncrackers in December; Barefoot in the Park during March; The Sound of Music in July; and Willy Wonka Jr., late September and early October.