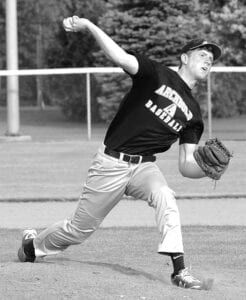 The Archbold baseball team is 1-3 after a win and two losses last week.

Leading 5-0 after the first two innings, Archbold scored four runs in the sixth and seventh innings to hold off Defiance 9-5, Monday, June 8, at Defiance.

Ethan Hagans was the winning pitcher. In six innings he allowed three runs on three hits, struck out eight, and walked four.

Archbold had eight hits to five for the Bulldogs. Chase Kohler led the way with a triple and a double. Zane Behnfeldt and Dawson Liechty each had a double. Drake Mohring, Noah Garcia, Caleb Hogrefe, and Brandon Taylor each had a single.

Archbold was back on the road, Tuesday, June 9, to Perrysburg, where the Yellow Jackets were victorious 10-3.

Garcia was the losing pitcher. In three innings he allowed three runs on six hits, struck out two, and walked two.

The Streaks had six hits. Mohring hit a double and a single; Liechty hit a double; Garcia, Carson Meyer, and Taylor each had singles.

The Yellow Jackets had nine hits while the Streaks had six. Garcia had three base hits, Taylor had two, and Behnfeldt had one.

Behnfeldt was the losing pitcher. In five innings he allowed four runs on five hits, struck out five, and walked four.