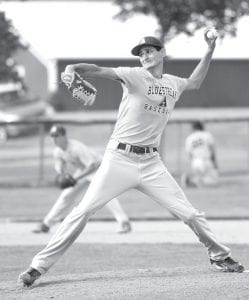 Archbold plays Miller City in the first round of the district tournament, Friday, July 7, 4 pm. All District 2 district tourney games are at Patrick Henry.

The district tournament is double elimination.

Tinora led 2-0 after the top of the second inning.

The Rams took a 1-0 advantage in the first inning when Spencer Giesige hit a sacrifice fly to center field, which scored Clay Fogt.

With two outs in the second, a double to left field by Fogt allowed Alex Henry to cross home plate, giving Tinora the 2-0 advantage.

But that was all she wrote for the Rams.

Archbold scored seven runs in the second, seven in the third, and five in the fourth to give the Streaks a win in 4 1/2 innings by mercy rule. 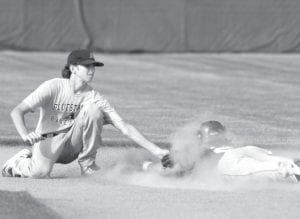 Archbold’s Jeron Williams attempts to tag Tinora’s Clay Fogt at second base but was too late, and Fogt was safe.– photo by Mary Huber

Tinora had three hits and committed five errors in the contest, while Archbold had 14 hits and two errors.

Ramos was the winning pitcher. In five innings he allowed two runs and struck out seven.

The game remained scoreless until the fourth inning.

With two outs, PH’s Christian Petersen got a base hit up the middle, then advanced to second base on a wild pitch.

Archbold finally got on the scoreboard in the bottom of the sixth. 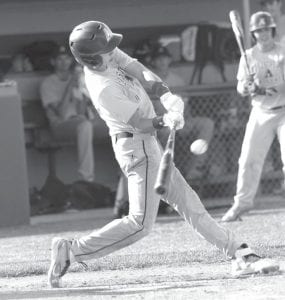 Kade Kern hits an RBI single to right field to give Archbold a 6- 2 lead in its sectional tournament game with Tinora, Thursday, June 29.– photo by Mary Huber

With two outs and Bryce Williams at first base, Petersen hit a triple to shallow right field that brought Williams home, tying the score at 1.

PH left a man stranded on base in the top of the seventh inning, giving Archbold a golden opportunity to take the win.

With one out, Grosjean hit a single to left field. Holden Galvan stepped up to the plate and hit a double to right center field, and Grosjean slid across the plate for the winning run.

Bryson Taylor was the winning pitcher. In seven innings he allowed one run and struck out 12.

At the plate, Petersen had a run-batted-in triple, Grosjean had a single, and Galvan had the game-winning walk-off RBI double.

Archbold finished the regular season with a 2-1 victory over Bryan, Tuesday, June 27.

The score was tied at 1 until the sixth inning, when Archbold scored the winning run.

At the plate, Kern had a double; Erbskorn, a single and a double; Rodriguez, two singles; B. Williams, Galvan, Brandon Miller, and TJ Rice, a single each.

Trevor Rupp was the winning pitcher. In seven innings he allowed one run and struck out two.

The stegosaurus was a large, plant-eating dinosaur that lived about 150 million years ago in what is now the western United States.

It had two rows of bony plates shaped like huge arrowheads sticking out of its back.

If all the world’s water were fit into a gallon jug, the fresh water available for us to use would equal only about one tablespoon.