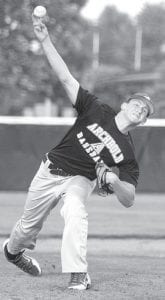 Archbold lost to Ayersville 4-1, Friday, June 21. Chan Wyse was the losing pitcher; in one inning he allowed four runs on two hits, walked two, and struck out one.

At the plate, Jeff Sparks hit two singles and Derek Walker had a double.

The Streaks traveled to Edon, Monday, June 24, and came home with a 4-1 loss.

Wyse was again the losing pitcher. In seven innings he allowed four runs on two hits, walked one, and struck out one.

Archbold had one hit: a single by Micah Bernath.

Evan Wyse had the gamewinning single in the bottom of the seventh inning to give Archbold (11-4) a 6-5 victory over Patrick Henry, Thursday, June 27.

Bernath was the winning pitcher. In seven innings he allowed five runs on two hits, struck out six, and walked four.

At the plate, Sparks had two singles and Jase Grosjean, one single.

Archbold was scheduled to begin play in the North Acme sectional tournament, Monday, July 1, against Delta.