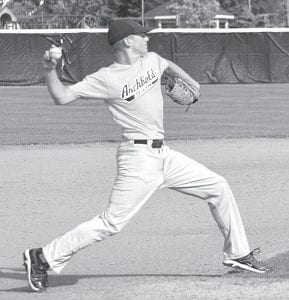 Archbold (18-5) advanced to the finals of the Acme North Sectional Tournament at Archbold with three victories last week.

The Streaks opened the tournament with a 6-4 victory over Evergreen, Tuesday, July 3. The third inning was the difference as Archbold broke a 1-1 tie with two runs.

Both teams scored three runs in the fifth for the 6-4 final.

Archbold had seven hits, and was led by Tyson Schnitkey, who went 2-4 with two triples and three runs batted in, and Dietrich, who was 2-2 with an RBI double.

Pettisville won its first game of the tourney 9-4 over Liberty Center, Tuesday, July 3.

The Birds led 8-0 after four on their way to the win.

Cam Norris was the winning pitcher. In four innings he allowed no runs on no hits, struck out none, and walked three.

The Birds had eight hits, and were led by Norris, who went 2-3 with a double and two RBIs. Eli King went 2-4 at the plate.

The Streaks defeated Pettisville 12-2 in the second round of the double elimination tournament, Friday, July 6.

Schnitkey was the winning pitcher. In three innings he allowed one run on two hits, struck out five, and walked five. Price pitched in relief.

Noah Miller was the losing pitcher.

In one inning he allowed four runs on two hits, struck out none, and walked four. King pitched in relief.

Evan Wyse led Archbold at the plate, going 2-3 with two doubles and four RBIs. Jase Grosjean was 2-3 with a double, and Micah Bernath went 2-3 with two RBIs.

Pettisville had five players with one hit each.

Dropping to the loser’s bracket, Pettisville lost 13-3 to Wauseon, Saturday, July 7, and was eliminated from the tournament.

The Birds led 1-0 after one, but Wauseon exploded for 11 runs in the second and third innings for the victory.

Kauffman was the losing pitcher. In three innings he allowed 11 runs on 10 hits, struck out none, and walked two batters.

The Birds had nine hits, and were led by Jacob Roth and Norris, who each hit two singles. Roth also had an RBI.

Archbold advanced to the sectional final with a 9-0 shutout of Napoleon, Sunday, July 8.

The Streaks led 7-0 after two and scored individual runs in the fourth and fifth for the win.

Walker pitched a complete game. In seven innings he allowed no runs on four hits, struck out one, and walked two.

Dietrich was 2-3 at the plate including a double and two RBIs.

Archbold was scheduled to play in the final, Monday, July 9, against the winner of the loser’s bracket.

By winning the winner’s bracket, Archbold already earned a spot in the district tournament in Archbold. The Streaks face Holgate or Columbus Grove.