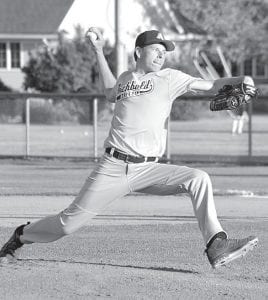 Archbold jumped out to an early 3-1 lead in the first inning behind the crafty pitching of Michael Walker.

Walker pitched four innings, giving up only two runs on four hits and keeping the Perrysburg hitters off balance most of the game.

Evan Wyse and Taylor Price combined to pitch the last three innings. Price struck out the last two batters to end the game.

The Blue Streak bats were very productive as five hitters collected two hits. Jacob Wagner had three singles. Zac Zimmerman and Tyson Dietrich both had a double and a single. Walker had two singles, and Wyse cracked his first varsity home run.

Zimmerman continued his hot hitting with a double. Walker had three singles.

Jase Grosjean led the Streaks at the plate with a double and single.

Micah Bernath earned the win in the nightcap. Leading hitters for Archbold were Price and Walker with three hits each.

Archbold went on the road Thursday, June 14, and won a Fulton County battle with Delta 3-2.

Archbold (10-4) scored one unearned run in the first inning off two Delta errors and a single from Dietrich.

Archbold struck again in the second with two outs. Price struck out, but advanced to first on a passed ball. After a Price stolen base, Bernath then singled to score Price.

Bernath stole second and scored on an infield single from Grosjean.

Walker pitched solidly for five innings and kept the Delta hitters off balance with his ability to change speeds.

The Archbold defense played one of its better games of the summer with outstanding plays from Wyse and Bernath.

Delta pushed across two runs in the bottom of the sixth off reliever Dietrich.

Tyson Schnitkey came on to close the door on Delta in the seventh to earn the save.