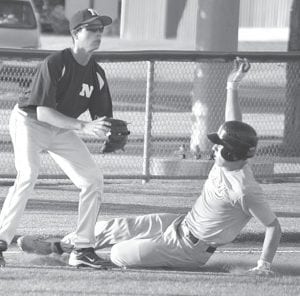 Archbold’s Evan Wyse slides into third base on a passed ball in Acme baseball action, Thursday, June 7 against Napoleon. The Streaks are 5-4 on the season.– photo by Mario Gomez

The Archbold Acme baseball team is 5-4 after the first two weeks of action.

The Streaks lost both games of a doubleheader with Defiance, Wednesday, May 30, in their season opener.

Michael Walker and Tyson Schnitkey pitched well against Defiance in game one.

Leading hitters for the Streaks were Walker with two doubles; Tyson Dietrich, a home run; and Jacob Wagner, a double.

In game two the Streaks spotted the Bulldogs seven runs in the first inning and played from behind most of the game.

Taylor Price pitched solidly after the first inning and had strong relief help from Zac Zimmerman.

Archbold traveled to Holgate, Friday, June 1, and won its first game of the summer 9-2 behind a strong pitching effort from Zach Short. Short pitched five strong innings, only giving up one hit.

The offense was led by Zimmerman, with two hits and two runs batted in. Wagner had two singles.

Archbold captured a 2-1 victory behind the arm of Walker. In seven innings he struck out four, walked one, and gave up only two hits.

Bryan took the lead in the top of the seventh inning on a walk and an Archbold error.

Evan Wyse, the Archbold catcher, led off the bottom of the seventh with a single followed by a Zimmerman single. After a wild pitch, Wagner plated Wyse with a ground ball.

C.J. Gladieux was inserted as a pinch runner and scored the winning run on a sacrifi ce fly off the bat of Price.

Archbold got a one-hit pitching performance from Bernath to take the opener of a doubleheader with Evergreen 1-0, Tuesday, June 5.

Walker continued his hot hitting with two singles. Price also had a single. Zimmerman hit a sacrifice fly to bring in the game-winning run.

The nightcap was just the opposite as Archbold came from behind to take a 17-7 win in six innings.

Evergreen jumped out to a 7-2 lead after two and looked to be in control when the Archbold bats took over and outscored the Vikings 15-0 the last four innings.

Price pitched through another rough start and was the winning pitcher. Zimmerman also pitched one inning of solid relief.

The Streaks played from behind most of the game, spotting the Wildcats seven runs in the first two innings, Thursday, June 7.

Archbold battled back to within 7-3, only to see Napoleon put three more runs on the board.

Trailing 10-3 in the bottom of the sixth, a leadoff hit by Schnitkey, a two runs-batted in single from Wagner and Grosjean’s RBI double closed the gap to 10-8.

Solid relief pitching from Wyse kept Archbold in the game.

After a short rain delay, the Streaks struck again with a Price single. He eventually scored to narrow the gap to 10-9.

The Streaks’ valiant comeback effort fell short in the bottom of the seventh with two runners on base.

Wagner led the Archbold attack with two singles. Dietrich and Grosjean both had doubles.

Crack Of The Bat Tournament

Archbold participated in the Defiance Crack of the Bat Tournament, Saturday, June 9.

In the opening game with Lima Shawnee, the Streaks raced out to a 4-0 lead.

Grosjean singled, who was then plated by Walker’s double. Price and Zach Short both had run-scoring singles in the first.

Solid pitching from starter Walker and reliever Price held the Shawnee attack at bay. The Streaks played solid defense behind Price and went on to win 9-4. Price recorded five strikeouts.

The offense was led by Walker’s double, single, and two RBIs. Grosjean had a double and a single and Short had two singles.

The Streaks had a rematch with Bryan in the second game. Archbold dropped a back-and-forth affair 12-11 after defeating the Bears 2-1 a week ago.

Bryan recorded 18 hits. The game had seven lead changes and was dominated by the Bears’ ability to get hits when they needed them.

The Streaks (5-4) were led by Zimmerman’s three hits, including a double. Schnitkey and Short both had two singles.