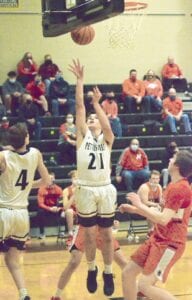 Pettisville’s Jaret Beck (21) gets free under the basket and scores two of his 10 points in the Birds’ Division IV sectional semifinal with Hicksville, Wednesday, Feb. 24.– photo by Mario Gomez

Third-seeded Pettisville started strong in its Division IV sectional boys basketball semifinal against Hicksville, but the Aces took over in the fourth quarter to earn a 52-47 win in the Bird Cage, Wednesday, Feb. 24.

“It was a tight possession game that we just let a few slip away.

“We put ourselves in that position and we needed a couple good looks, a few (shots) to fall, and a few rebounds here and there.”

“In my opinion our district is one of the deepest ones we’ve had in a long time. You’ve got (number two seed) Toledo Christian and (#1) Antwerp that are probably in the next level of competition from the rest of us.

“You go seeds three to 11, and just about anybody can beat anybody on a given night.”

Hicksville (11-10) defeated Holgate 44-30 in the sectional final on Friday, Feb. 26, to advance to the district semifinal against Toledo Christian.

The seventh-seeded Aces defeated Pettisville 53-41 during the regular season on Feb. 6.

Jackson Bergman and Landon Turnbull scored all 11 Hicksville points in the second as the Birds managed just four more points but still led 25-23 at the half.

“I thought our start to the game was exactly how we expected it to happen,” said Leppelmeier. “We haven’t had some great starts in probably the last six or eight games.

Hanging Tough But Not Enough

Josh Myers opened the second half with a trey for the Aces’ first lead, 26-25, since the start of the game.

Max Leppelmeier and Turnbull exchanged baskets before PHS went on a 6-0 run that was capped off by a Zakkai Kaufmann steal and layup for a 33-28 advantage.

Bergman stopped the run after a Hicksville time-out, but Jacoby pushed the lead back to five at the end of three to lead 35-30 going into the fourth.

Turning up the defensive pressure to start the fourth, Hicksville forced a pair of Pettisville turnovers and went on a 7-0 run of its own.

Jacoby and Leppelmeier scored on a layup and trey to keep PHS in the game, but Hicksville converted 6-8 free throws down the stretch to lock down the win.

Leppelmeier scored the final points of his Blackbird career with a three as time expired for the 52-47 final.

“There were some times we could have contested more,” said Leppelmeier. “It just seemed like we had some turnovers that were timely turnovers.

“Once (Hicksville) got that lead, they’ve got some veteran guys out there that can take care of the basketball and knock down free throws.

“I told our guys we were better than when we played Hicksville the time before. Our guys improved and we put ourselves in a position to win.”

Pettisville had three players in double figures, led by Leppelmeier with 15 points.

Jacoby scored 12 points and pulled down 12 rebounds for a double-double. Jaret Beck scored 10.

Bergman led all scorers with 25 points.

Departures And The Future

Pettisville will have three returning starters next year.

“We have guys back that have some really good experience, not just some quality varsity time,” said Leppelmeier.

It was the last game in the Bird Cage for four seniors.

“I took over as head coach when they were in eighth grade,” said Leppelmeier.

“They had the opportunity as freshmen and sophomores to play junior varsity with some very good teams ahead of them. These guys have shown leadership all throughout whatever sport.