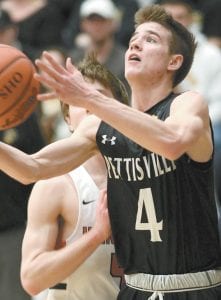 Pettisville and Hicksville battled to a tie at 34 for the first 16 minutes of a hardfought Division IV district final, Friday, March 8, at Napoleon.

It was the final 16 minutes that did Pettisville in and allowed the Aces to win their first district title since 1941, 68-51.

“I told our guys, be thankful and have some gratitude, because this is not easy to do,” said Brian Leppelmeier.

“It’s our first district final since 2009. It’s hard. The last two years we got knocked out in the sectional.

“It was just a great ride to get here, and I’m proud of their effort.”

Pettisville ended with a Buckeye Border Conference co-championship, a sectional title, and an 18-7 record.

Hicksville (23-2) dealt Pettisville a 66-47 defeat on Feb. 9, during the regular season, but the Birds were playing their best basketball at the end of the season.

The first time the two teams played this year, Hicksville “buried nine threes in the first half,” said Leppelmeier.

The first half featured 10 three-pointers, including six from Pettisville.

A 4-1 Pettisville lead quickly turned to a 6-4 deficit after five straight points by Landon Turnbull.

A Logan Rufenacht trey was answered with another Turnbull basket.

Detric Yoder buried one from beyond the arc; Parker Thiel answered with a deuce for a tie at 10.

The lead continued to change hands until Graeme Jacoby scored with two seconds on the clock, giving the Blackbirds a 22-19 advantage after one.

Hicksville opened the second with an 8-0 run until Yoder and Rufenacht connected on a pair of treys to retake the lead, 28-27.

The Aces held a 7-6 scoring advantage until the half, and the teams went into the locker room tied at 34.

“What a great first half! Back and forth, kids making plays,” said Leppelmeier.

“We were right where we wanted to be: even with them with the third and fourth quarters to play.”

Hicksville opened the fourth with an 11-4 run, punctuated by Thiel scoring his 1000th point of his career, for a 56-44 lead with less than five minutes left.

The Blackbirds scored just seven points down the stretch while giving up 12– including converting 14-16 free throws in the fourth– for the 68-51 final.

“In the second half they just spread us out and we weren’t able to convert,” said Leppelmeier.

“Our offense wasn’t helping our defense out.

“Once they got a lead– I’ll even say two possessions– they’re just so hard to come back on. They spread you out.

“You’ve got to score. You just can’t come up dry with those guys and expect you’re gonna get stop after stop.

“You kinda have to go blow for blow, and we just weren’t able to do that.

Seven seniors left the court for the final time as Blackbirds.

“Austin Horning went down with the injury. I feel so bad for him that he wasn’t able to experience this on the floor, but he’s been such a great leader.

“You go from Eli Grieser and Caleb Keim coming off the bench. Great effort; (they) prepared our guys in practice even though maybe they didn’t get so many minutes.

“You’ve got Logan (Rufenacht) and Canidate (Vickery) and Detric (Yoder) just giving quality minutes out there and just being great leaders.

“Sam (Rychener) was one of our more improved players all year long. He established himself as a good finisher around the rim and led us in rebounding.”

“Such great kids to be around, and they all get along. I’m just very proud of their effort all year long.

“I think we got better and were playing our best basketball at the end of the year, and that’s the only thing we can ask out of these guys.”

The senior point guard averaged 25.3 points in his three tournament games and scored a combined 76 points.