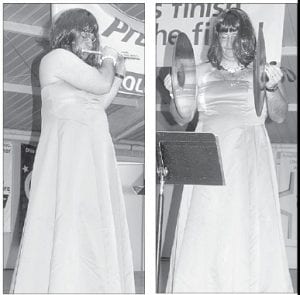 Royal Short, Archbold High School principal, was “Miss Royal Princess,” ABC 4 Maddy’s entry into the Relay For Life Miss Relay Contest, Friday, June 7. He, or she, told the audience he, or she didn’t have a talent, but would play some instruments. At left, Royal Princess plays the flute; at right, she prepares to crash cymbals together. Royal Princess was the winner of the Miss Relay contest.– photo by David Pugh

Deb Buehrer, team cochair, said she kept thinking, “Well, I don’t know if we’re going to be able to do it.”

In the end, Lambert was right.

Most of the money goes toward cancer research; a portion covers expenses.

However, Buehrer said money is still coming in. Relay teams have until August to contribute.

“Miss” is a misnomer, as the contest features men dressed as women.

Buehrer said ABC 4 Maddy also won the “Midnight Munchies” competition, in which teams offer food, and the crowd votes on the best offering.

Buehrer said ABC 4 Maddy will begin fund-raising for 2014 in September, during the football season.–David Pugh