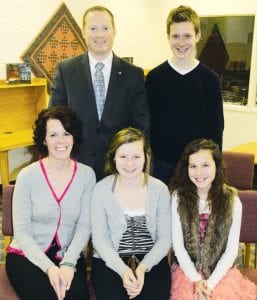 Aaron Rex was selected as the new superintendent at the Archbold school board’s Monday, Jan. 7 meeting. He is shown with his family. Seated, from left: his wife, Kami, and daughters Lydia and Ella. Standing with Rex is his son Layne.- photo by David Pugh

Aaron Rex, principal of Wapakoneta High School for the past seven years, is the new superintendent of the Archbold Area School District.

The Archbold school board met in executive session for approximately a half hour before returning and approving motions to sign Rex to a three-year contract, at an annual salary of $101,000.

Rex said when he began looking at superintendent jobs, he only submitted one application– Archbold.

“I wanted to go somewhere that had a great reputation, where my kids could go to school, and I knew they would get a great education,” he said.

“I knew it was a great community. I did a lot of research about the community.

“I came here and visited before, so I could see what the town was like, and knew it could be a great place to continue to raise my family.”

He earned a bachelor’s degree in social studies education in 1997.

During a Career Day at BGSU, he was interviewed by the Wapakoneta school district, and was hired on the spot as a social studies teacher.

“We had great administrators where I came from,” he said. “After one year, I got into doing a little bit of administrative work, and it went on from there.”

Attending BGSU in the evenings and summers, he earned a master’s degree in education administration and supervision in 2002. He did an additional year and a half of study to earn his Ohio school district superintendent license.

Rex and his wife, Kami, have been married 17 years. They have three children: Layne, a freshman; Lydia, a sixth grader; and Ella, a fourth grader.

They plan to relocate to Archbold. Rex said they want to become involved in the community.

Wapakoneta High School lists an enrollment of almost 1,100 students on its web page.

AHS reported a head count of about 400 to state officials in October 2012.

The website said WHS is rated Excellent by the Ohio Department of Education, the same as AHS.

Rex said the first thing he wants to do when he arrives at Archbold “is come in and get to know the people: the staff, the community, the students. I want to know who the people are.

“From there on out, I’m going to meet with Joe (Long, interim superintendent) and Chris (Ziegler, district treasurer) and the school board, and see where they want to go with some of the things we talked about in the interview process.

“Before we make any changes, I want to find out the great things the school is doing, and see what we can do to build on that.”

Rex said finances are a challenge for every school district.

“Everybody has to do the best they can with the money they have,” he said.

“The great thing about Archbold– where a lot of schools struggle with student success, Archbold students have it. Students do well on state standardized tests and the ACT (American College Test), so that’s very exciting.”

Rex said he had followed Archbold’s wind turbine project in the press, and read the grant program the Archbold school board went through.

“Green energy is something all schools are trying,” he said. “We did geothermal energy when we did our new building. Everyone is trying to do something to save money, so I think it’s a good idea to try to do that.”

Rex said he wants to learn more about the turbine project, and see how much money it can save the district.

“That’s something students will have to be able to do– use technology when they go to college, so they’re preparing the kids to go on,” he said.

Jon Lugbill, who was reelected president of the school board during the meeting that evening, said of the original 20 applicants for the superintendent position, six were selected for interviews.

Rex “rose to the top for what we need here at Archbold,” Lugbill said.

In a prepared statement, Lugbill said, “Mr. Rex is a highly motivated individual, who strives for educational excellence.”