A Lot To Learn About Buttons: Layman 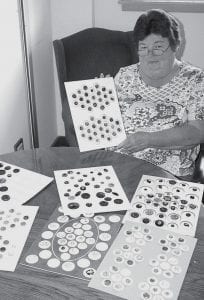 Deborah Layman, Fayette, with some of the buttons she has collected over the years. She said there is so much to learn about the hobby, and she’s learning more all the time. – photo by David Pugh

The button, the humble device used to fasten clothes since… there were clothes?

Not so, Deborah Layman, of Fayette, says.

Buttons didn’t make their appearance until the 18th century.

“Most, in the beginning, were owned by royalty,” she said.

Layman is a button collector, and a button expert.

How did she get involved in collecting buttons?

“I’ve been asked that a whole lot of times,” she said.

“I started collecting antiques in 1968, the year I got out of high school.

“As life evolved, I got into collecting different things. In 1968, I was collecting primitives,” she said.

Eventually, she had her own antique shop in Carthage, Mo.

She would buy antiques at estate sales, and if she’d buy sewing machines or sewing kits, she’d always end up with a few buttons.

She happened to get in touch with a woman from Monet, Mo., who had been a past president of a button-collecting group. She met with her, and the hook was set.

“When I collect something, I have to learn everything I can,” she said.

She started as a button dealer, selling buttons at buttoncollecting shows, “but I couldn’t buy enough to be a dealer, so I started collecting.”

Since 2000, she’s been to every convention of the National Button Society. In addition to the national group, she has memberships in several state organizations.

A Maze Of Buttons

In its guide to competitions, the National Button Society lists dozens of categories of competition, from buttons made from materials ranging from plastic to glass to bone, to buttons with themes or pictures.

There’s famous button stories, such the one about the Governor of Texas, who used a button from his coat for the official seal of the lone star state.

Layman is partial to buttons made of glass.

After the queen’s husband died, she wore black, with black buttons, during her period of mourning.

One of Layman’s favorites is a large black glass button. Dating back to the 1880s, the button features a carved picture of a horse and rider.

Buttons are entered in competition on cards, in groups of 12 to 15 similar buttons. If a judge feels a button doesn’t belong on a particular card, he or she places a small, round adhesive sticker on the card.

“We call them measles,” Layman said.

There are others who specialize in other types of buttons.

Men, she said, are often interested in buttons from military uniforms; one man specializes in collecting buttons from coveralls.

As with any collectable, buttons are bought and sold, and the price can range from a few cents, to hundreds and even thousands of dollars.

Like any antique, the value varies on age and condition, she said.

For buttons from the 18th century, “prices have gone up tremendously,” she said.

For Layman, there’s so much to learn about buttons.

“There’s a whole lot of things to learn, it takes awhile to learn it, and I learn something new all the time,” she said.

She’s already passing on her hobby. She said she’s given her granddaughter, Madison Layman, 7, of Missouri, her first card of buttons.