A Great Time At The Fair

Above: Roy Miller, Fulton County Sheriff, races to the finish line and wins the Bouncy Horse race at the Fulton County Fair, Tuesday, Sept. 5. The race pitted the Fulton Co. Sheriff Department, represented by Miller and Matt Smithmyer, a deputy (far right), against the Wauseon Fire Department, represented by Phil Kessler, assistant fire chief, and Rick Sluder, fire chief, from left. The sheriff won bragging rights for the next year even though there were allegations of “cheating” after he picked up his horse and walked with it instead of bouncing on it. However, since there were no rules, he couldn’t have cheated. Bottom left: Lincoln Aeschliman, 6, Pettisville, keeps older brother Creighton’s beef feeder calf “Big Al” occupied. Bottom right: Adriana Thompson, an AHS freshman, takes a wild ride on the “Freak-Out.”– photos by Mary Huber 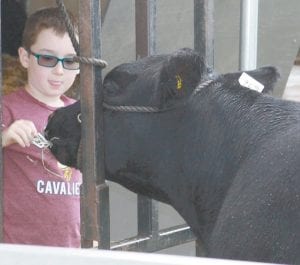 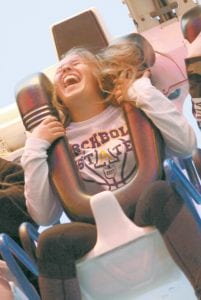