A Feast Fit For Fairgoers 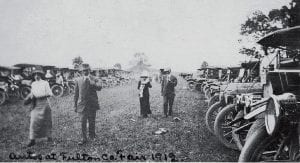 As seen in this 1912 photo, Fulton County fairgoers wore their “Sunday Best” to the fair.- photo courtesy Fulton County Fair Board

When it comes to serving up that mouth-watering array of once-a-year taste treats known as “fair food,” the Fulton County Fair has long stood second to none.

In addition to concessionaires who travel the county fair circuit offering an array of goodies that run the gamut from walking tacos to cotton candy to deep-fried everything, local organizations operate many of the stands, pouring the proceeds from sales right back into the Fulton County community.

The Evergreen Music Boosters’ food stand began selling its homemade chili and pies in the late 1940s at the fair to buy band uniforms.

At first, the group worked out of a tent in front of the floral building, where dedicated “band moms” slept on army cots overnight to guard the equipment.

Band members were expected to work alongside band moms, who made 575 pies alone in the first year.

When Lyons, Metamora, Chesterfield, and Fulton schools consolidated, parents from all of them formed the Evergreen Music Boosters, which operates under the grandstand today.

Aetna Grange started serving barbecued chicken at the fair in 1957, in a tent in front of the Grange Building.

The Fulton County Dairy Association has been serving up its trademark milkshakes for over half a century. Last year, the group sold 40,089 of the creamy concoctions.

The Wauseon Music Boosters’ doughnut stand first started selling its luscious pastries at the fair in the early 1960s, when an ambitious group of band mothers decided it might be a better way to raise money for the Wauseon High School band than selling candy bars door-to-door.

The first year, they charged 60¢ for a dozen doughnuts and raised about $800 during Fair Week.

The Fulton County Pork Producers stand got its start some 40 years ago, when several families that raised hogs started selling sausage sandwiches at the fair.

That year, the families butchered three sows, pattied the sausage by hand, cooked them on a rented grill, and served them in a tent with a sawdust floor and no running water.

The Fulton County Cattle Feeders have been grilling burgers during Fair Week since the 1970s.

Over the course of the week, it takes roughly 470 people to man the stand, which is more than the population of Pettisville.

In 1959, the Fair Board asked village mayors (or their substitutes) to be available to ride or drive an ostrich in a Wild Animal Show slated for Saturday night of Fair Week.

In 1961, the vice president of the Fair Board challenged the president to a series of horseshoe pitching matches.

The winner was to be awarded a miniature thunder mug in front of a packed Grandstand crowd.

For those unfamiliar with life before indoor plumbing, thunder mug is slang for the container than people used to put under their beds at night in case nature called and they didn’t want to make the trip to the outhouse.