A Debt To Society 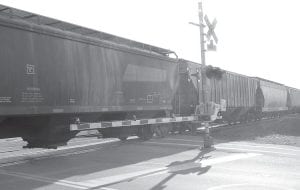 In the world of criminal justice, when a convicted criminal is punished, it’s often referred to as “paying a debt to society.”

Wixom said village officials decided it was necessary to hold Norfolk Southern accountable for the inconvenience the blocked crossings have caused.

There is a cost involved. When a train stops and blocks the downtown crossings for extended periods of time, everyone from average motorists to commercial vehicle drivers must either stop and wait for the train to move, or drive out to the Clyde’s Way underpass or Co. Rd. 24 to reach their destination. That costs the most precious commodity anyone has- time. NS has run up a debt, a debt calculated in time. It can’t repay in denominations of hours or minutes– only in dollars.

And what about pedestrians? If people walk across the tracks to eat lunch, or go to stores, it’s not like they can easily walk to Clyde’s Way or Co. Rd. 24 to cross the tracks to get back to the other side. Some people have resorted to climbing over or under the stopped train to get across– a very dangerous step, indeed.

The question is, will these charges make a difference? Will the threat of more criminal charges against the company cause it to change its behavior?

No one can know, but it’s doubtful. NS is a huge corporation. A company press release said net income for the third quarter of 2018 was $702 million on revenues of $2.9 billion. A $100 fine in Western District Court isn’t going to make much difference. It will probably cost the company more than $100 to have its attorneys file guilty pleas and write a check.

But just as a mosquito can keep a man awake despite the man being 100 or more times its size, perhaps Archbold can make an impression on NS.

In the meantime, NS owes a debt to society. It’s time to pay up.