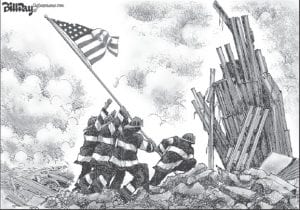 Of course, we know what happened on 9-11-01. Four hijacked airliners were turned into weapons and flown into the World Trade Center in New York City, the Pentagon in Washington, D.C., and a field in Pennsylvania. Thousands died. The nation was rocked down to its foundation.

America reeled. We cried for those lost. We attacked those responsible. We shot and killed the man who we determined was the kingpin, and then buried him at sea.

And we recovered. The Pentagon was repaired. A new tower now stands in New York City.

We became more vigilant. We submit to being questioned, and take off our shoes before we get on an airplane. Our identifications are more stringent. We even need a passport or passport card to go to Canada.

And it works. Islamic terrorists have not attacked us on our own soil since.

But we cannot allow time to tarnish our vigilance and turn it into complacency. The pieces of the World Trade Center that are scattered around the country, including Fulton County, must remind us to keep our guard up.

If we fail, those who hate America will surely attack again.