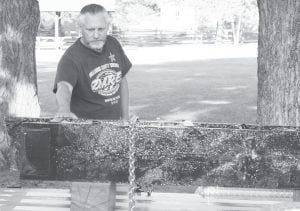 Dan Burk, West Unity, a 1976 AHS grad, lays his hand on the Fulton County 9/11 artifact in July 2011. The steel beam was part of the World Trade Center destroyed on 9-11. It will soon have a permanent home at the Fulton County Fairgrounds.

After months of being carried on a trailer, the steel beam from the wreckage of the World Trade Center will soon have a permanent home.

The memorial will be located near the northeast entrance to the fairgrounds near the veteran’s building, north of the racetrack.

Hamer said the groundbreaking will be simple. Local officials will attend, and the committee is searching for a guest speaker– hopefully, a solider home from Afghanistan.

Hamer said plans call for the memorial to be constructed in two phases.

This year, the first phase involves construction of the memorial.

It will feature stone pavers, which have been sponsored by individuals and businesses. 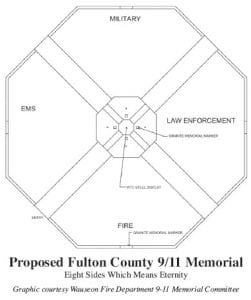 At the center will be a concrete and steel stand into which the beam, officially known as Artifact H-0035A, will be set.

Smaller pieces of marble will be inscribed with the insignia of each Fulton County fire department.

The second phase of the project will see the construction of a gazebo structure over the memorial, to protect it from the weather. Plans are to construct it in 2014.

The fairgrounds location will give the public access to the memorial day and night, while the onsite caretaker will be able to keep an eye on it, Hamer said.

As donations, including labor to construct the memorial, are factored in, the actual cash outlay will be reduced, she said.

While waiting for its permanent home, Artifact H- 0035A has done a fair share of traveling.

Hamer said it traveled into Michigan to appear in a parade.

It’s been to several parades and festivals in Fulton County, traveled to Toledo for a Mud Hens baseball game, and visited Henry County.

But the real travelers are two flags that covered the beam when it was brought by firefighters to Fulton County from New York.

It didn’t sit on a shelf or tucked away in a drawer. Hamer said the rangers stuffed Old Glory into their backpacks and took it out on missions.

“She came back a little dirty and beat up,” Hamer said.

The second flag, “Valor,” was taken to Afghanistan by the same Ranger crew in March 2012. It returned July 4.

While the groundbreaking ceremony will be a simple event, Hamer said a larger event is planned for late May or early June, when the steel beam is set into its base in the memorial itself.